You are here: Home » Articles filed under: 'News' » Article: 'Fred and Myrtle’s house' 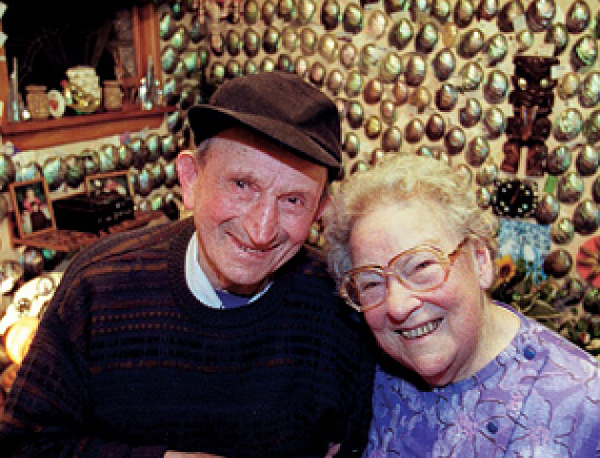 The millionth visitor, three-year old Miles who was visiting the Museum this morning with his grandparents Chris and Julie Bakker of Rangiora (right), said he thought the Paua Shell House was “sparkly”. Mr and Mrs Bakker added, “We hope that life polishes us as nicely as the paua shells in the Paua Shell House.”

More than 50 years ago, Fred and Myrtle Flutey attached a paua shell to the living room wall of their home in the fishing town of Bluff at the bottom of the South Island. Over the years, they added more than 1,000 other paua shells to the walls and collected an amazing array of kiwiana ornaments.

Fred and Myrtle Flutey opened the doors of their home to visitors, welcoming more than a million people to the Paua Shell House as it become known in Bluff. They greeted all their visitors in person, sharing stories about their collection and their passion for paua.

In 2007, some years after the couple passed away, their family agreed to loan the Flutey Collection of more than 4,000 objects, including 1,234 paua shells, to Canterbury Museum. Fred and Myrtle’s Paua Shell House at Canterbury Museum opened on 4 July 2008. The front portion of the house was recreated in the Museum from the original plans of the Flutey’s Bluff home and from photographs and footage of the couple’s living room.

As well as the paua shells and other ornaments from the living room, original items from the Bluff house include the carpet, garden ornaments, the house number and the giant concrete paua shell.

Museum Director Anthony Wright says that Museum visitors continue to be surprised and delighted by Fred and Myrtle’s Paua Shell House and often laugh out loud during the accompanying short film. Narrated by Gary McCormick, it tells the story of the Fluteys and explains the cultural phenomenon of kiwiana.

“Since we opened Fred and Myrtle’s Paua Shell House eight years ago it has become a much-loved part of the Museum preserving a slice of Kiwi life for generations of visitors to enjoy.”