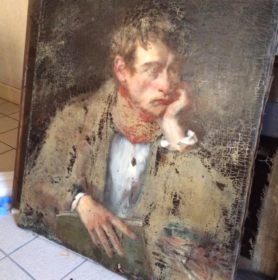 A damaged painting from the Musée Girodet.

Recent heavy rainfall in France has led to dangerously high water levels, but while some Paris museums have managed to safeguard their collections, staffers at the Musée Girodet found themselves with hundreds of water-damaged artworks. The Montargis-based museum in the Loire Valley is primarily dedicated to paintings by its founder, the neoclassical painter Anne-Louis Girodet-Trioson — who studied under Jacques-Louis David — but also holds a number of works by other artists mainly of French, Flemish, and Italian backgrounds. Among the works affected by the floods are a number of Girodet’s creations as well as sculptures and paintings by Théodore Géricault, Francisco de Zurbarán, Jean-Jacques Feuchère, and Henry de Triqueti.

Closed for the past four years due to ongoing renovations, the Musée Girodet was set to reopen next year but will have to push back that date due to the flood, which Montargis Mayor Jean-Pierre Door described as a “cultural catastrophe.” The museum’s building sits at the center of a narrow strip of land bordered by the Loing river and a canal, but during the renovations most of its collection has been stored off-site, even closer to the water, in the underground vault of a former bank.