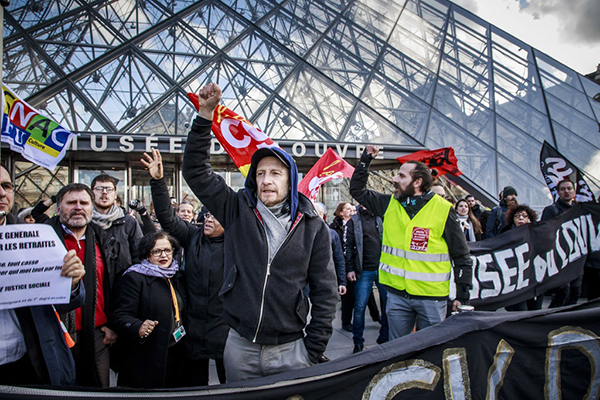 Union workers protested the government’s pension plan outside the Louvre in Paris on Friday. Credit: Christophe Petit Tesson/EPA, via Shutterstock.

Protesters angry about the government’s pension reforms prevented visitors from entering the museum, which is one of the French capital’s most visited sites.

PARIS — Visitors were turned away from the Louvre on Friday after strikers protesting the French government’s planned pension overhaul blocked entrances to the museum, leaving tourists from around the world befuddled and frustrated.

The Louvre — the world’s most visited museum — was the latest target in the 44-day standoff between the government of President Emmanuel Macron and the labor unions opposed to him, with strikes that have caught commuters, business people and tourists in the middle.

About 100 protesters prevented visitors from entering the museum, including through the famed glass pyramid that sits in the Louvre’s central courtyard, where they waved union placards and chanted slogans against President Emmanuel Macron as tourists looked on glumly.

“Closing the Louvre to prevent tourists from visiting is very important because it’s the most visited museum in the world,” said Christophe Benoit, 52, a protesting employee of France’s Culture Ministry, although he acknowledged that some visitors were “very angry.”

“We do understand that, but we feel like there is no other way to make our voices heard,” Mr. Benoit said.

Not everyone was convinced. One crestfallen visitor, who gave only her first name, Chantal, said she had come from a Paris suburb to see the Leonardo da Vinci retrospective, the museum’s latest blockbuster show, which is fully booked far in advance.

“I’d been planning this visit for three months,” she said, expressing irritation that her daily commute had already grown considerably longer because of the transportation strikes. “The tickets were already bought, and it took me an hour on public transit to get into Paris, so it’s a waste of time.”

“I don’t really understand why they are striking,” said Giuliana Maletese, a student visiting from Italy. “I just hope we’ll be refunded because we already bought our tickets online.”

Labor unions, noting that Mr. Macron had given his victory speech in front of the glass pyramid after the 2017 presidential election, said in a statement that they now stood there “staunchly opposed” to his “disastrous” pension overhaul, which aims to unify 42 different public and private plans into one state-managed, point-based system. The unions also protested working conditions at the Louvre because of staff and funding cuts, the statement said.

A Louvre spokeswoman said on Friday evening that tourists who had booked tickets in advance would be reimbursed. But she acknowledged it would be much harder to restore reservations for visitors who had missed their time slot for the da Vinci show.

It was unclear how long the protesters, a mix of Louvre employees and strikers from other sectors, would continue to block entrances.

Protesters have also staged smaller-scale actions, like closing some of the museum’s exhibition rooms, according to Christian Galani, 45, one of those demonstrating on Friday.

“It’s the first time we’ve completely shut down the museum, which makes things much more visible,” said Mr. Galani, who works night shifts at the Louvre as a security guard.

Train conductors, teachers, dock workers, energy workers, opera dancers and others have gone on strike and taken to the streets of Paris and other major cities over the past weeks to protest against Mr. Macron’s pension overhaul, which would abolish some special retirement plans and which protesters worry will lower their retirement payouts.

About 187,000 protesters marched around France on Thursday, the latest day of demonstrations, down from 452,000 the previous week, according to the Interior Ministry. Union figures, while higher, have shown a similar dip.

Public opinion is still mostly in favor of the protest movement, but support is waning. Transportation disruptions have also become less severe as railway workers, hardly mollified by government concessions but unable to forego pay any longer, are returning to work.

Train traffic was almost normal around the country on Friday and some metro lines in Paris were back up and running, albeit slowly — a stark improvement from the first weeks of the strikes, which had ground transportation to a near complete halt.