You are here: Home » Articles filed under: 'News' » Article: 'Frog Goo to the Rescue'

Frog Goo to the Rescue

Why frogs may hold the key to curing your next illness. 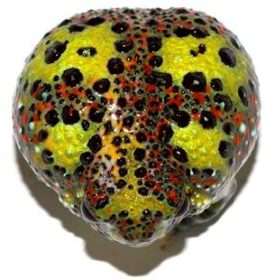 Having healthy frog populations in your neighborhood may benefit you indirectly by keeping mosquito populations down, but frogs may also provide the cure to your next illness. Frog skin secretions in particular are increasingly being explored for drugs to help fight infections, release insulin, regulate heart function and even cure cancer.

Frogs live in the kind of places that are conducive to the growth of potentially harmful bacteria and fungi, so it’s not surprising that they have developed the ability to protect their skin from invasion of disease-causing microorganisms. Now these compounds are being explored for potential new drugs for fighting human diseases.

There are over six thousand frog species known on earth, and each of these species carries in its skin an arsenal of weapons against infection. Among the substances produced in frog skin are alkaloids, steroids, and peptides (amino-acids) with broad-spectrum antibacterial and antifungal activities. These peptides are released by the skin, often in very high concentrations, in response to stress or infection, and increase when in an environment that promotes the growth of microorganisms. Because of the general way in which they work, antibiotic resistance is likely to evolve more slowly to drugs developed from these peptides compared to conventional antibiotics.

In addition to providing a host of potential new antibiotics, some of these peptides have also been shown to inactivate viruses. These include secretions from the African Clawed Frog (Xenopus laevis) and Waxy Monkey Frog (Phyllomedusa sauvagei), which have activity against herpes simplex virus, and those from several Australian tree frogs (Litoria spp.), which inhibit HIV infection in the lab.

Frog secretions have also been shown to have activity against human cancer cells, have insulin-releasing properties that may be useful in treating Type 2 diabetes, and have spermicidal compounds that may be suitable to be developed into contraceptives. A peptide from the skin of a Pumpkin Toadlet (Brachycephalus ephippium) is capable of dilating blood vessels, and may have benefits in the treatment of cardiovascular disease.

Aside from curing ills, frog skin secretions may also provide pain relief, with the isolation of an alkaloid from the Phantasmal Poison Frog (Epipedobates tricolor) having 200 times the analgesic potency of morphine. Frog secretions may also help deliver drugs in more effective ways, with the foam produced by Trinidadian Tungara frogs (Engystomops pustulosus) to mix with their eggs being investigated as a delivery system for antibiotics, as it is capable of taking up drugs and releasing them at a stable rate.

Secretions of the particularly sticky kind used by frogs to deter predators (or even glue potential-predator’s mouths shut!) are also of great medicinal interest. Adhesives produced by the Australian burrowing frogs (Notaden) are strong and flexible even when wet, and have been explored for use as a medical adhesive to treat human knee injuries.

Each frog species may produce dozens of compounds capable of curing various ills and no two species with the same array of compounds in their skin have yet been found. Every time we lose a frog species to extinction, we lose not only their important ecological role, but also their unique potential medicinal cabinet.