You are here: Home » Articles filed under: 'News' » Article: '‘… frogs also dealing with a pandemic’ AM’s' 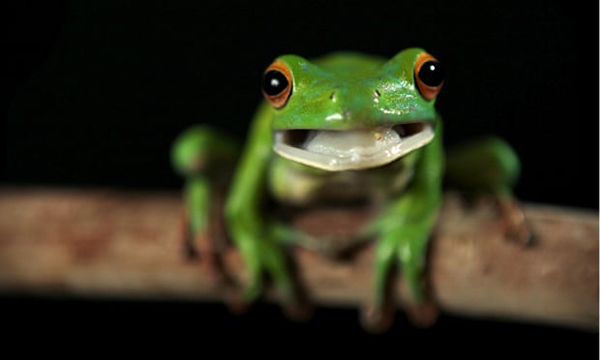 Lisa Cox, ‘Like nothing in my lifetime’: researchers race to unravel the mystery of Australia’s dying frogs, The Guardian, 19 September 2021

After asking for public help with their investigations, scientists have received thousands of reports and specimens of dead, shrivelled frogs.

In the middle of Sydney’s lockdown, scientist Jodi Rowley has been retrieving frozen dead frogs from her doorstep.

Occasionally one will arrive dried and shrivelled up in the post.

She’ll pack them in ice in an esky to be taken to her lab at the Australian Museum, where even more samples – green tree frogs, striped marsh frogs and the invasive cane toad among them – are waiting in a freezer for genetic testing.

Rowley and her team, along with scientists at the Australian Registry of Wildlife Health at Taronga zoo and a forensic unit in the NSW department of planning, industry and environment, are trying to solve the mystery of what is killing Australia’s frogs.

Since late July, they’ve collected 1,200 records of dead or dying frogs, about 70% of them in New South Wales and 22% in Queensland.

“I know we’re dealing with our own pandemic but frogs are also dealing with a pandemic and whatever is going on right now is awful,” Rowley said.

“It’s like nothing in my lifetime that I’m aware of.” 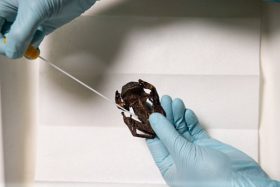 Rowley, a conservation biologist specialising in amphibians, is the lead scientist at the Australian Museum’s FrogID, a citizen science project that for the past four years has focused largely on recording the calls of Australia’s many frog species.

But its work shifted after Rowley did an ABC radio interview in late July to talk about dead green tree frogs that were being found around Scotts Head on the NSW mid north coast.

After that, Rowley started receiving emails about frogs in similar condition being found in other parts of the country.

A week later she and Karrie Rose, the head of Australian Registry of Wildlife Health, wrote a piece for the Conversation that asked people who spotted sick or dying amphibians to make a report through the FrogID email.

“It’s been quite devastating to be at the receiving end of some of these emails. I can only imagine how hard it is for the people out there who are seeing these frogs.” 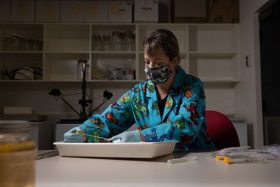 Rowley at work in her lab. Photograph: Carly Earl/The Guardian.

One of those reports came from Yvonne Hulbert, who runs a bed and breakfast on an acreage on Macleay Island near Brisbane, where there is a thriving frog population.

Over the past few months they’ve found browning and dead frogs along their properties.

“They go a fawny beige colour then turn brown. They seem to get dry and they become emaciated and then shrivel and become skeletons,” Hulbert said.