You are here: Home » Articles filed under: 'News' » Article: 'From Te Papa Press to Penguin NZ' 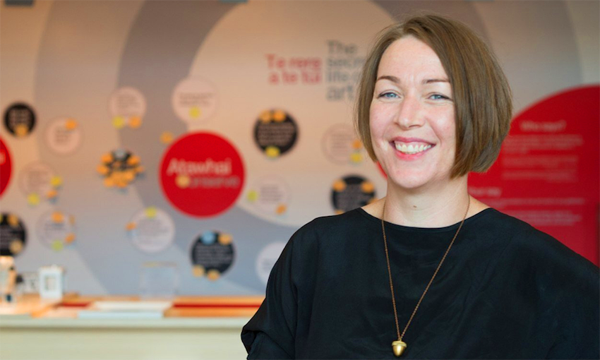 Everyone in the New Zealand book industry is waiting and watching to see what kind of impact Claire Murdoch is going to make as the newly appointed head of publishing at Penguin Random House (PRH). Murdoch, 42, brings a lively energy to the most dominant mainstream publishing house in the country. She belongs to a rock music biography book club and danced to Lou Reed’s spare, romantic ‘This Magic Moment’ at her wedding. She’s also a former publisher at Te Papa Press, where she developed an impressive catalogue of high-end, prize-winning books on art and natural history.

Murdoch will be entirely focused on producing a raft of new local material: fiction, non-fiction, children’s books. That’s a substantial commitment at a time when there’s a lot of contraction in the industry. It’s also notable that while PRH is an international company, it has a complete team on the ground here: editorial, publishing, production, design, sales and publicity.

Murdoch is currently the product and audience leader at Radio New Zealand in Wellington. She moves to Auckland with her husband, a digital strategist, and two young children for the PRH job, which she starts in early August.

Her interest in culture and books started early. The daughter of a New Zealand diplomat, the Murdoch family lived in Washington for a few years when she was young. She attended Samuel Marsden Collegiate in Wellington when the family returned home, then did a degree in English literature and film studies, culminating in a 10,000-word essay on the magnificence of David Lynch for an honours essay.

During the final years of university in the late 90s, she worked at the Dominion as an editorial assistant. “I was too nice to go into journalism,” she later wrote, in a piece for the Publishers Association of New Zealand.

“No offence, sorry!” she laughs. “There were terrific journalists hammering away on their typewriters and fighting with each other. It was pretty awesome….I’ve remained immensely drawn to journalism ever since.”

A stint at film school in Sydney only proved that while she was having fun, she was “too clumsy” to be let loose on a film set. But then she had a life-shaping moment when she visited a friend’s aunt in an apartment in Neutral Bay. It was filled with books.

“That did it,” she recalls. “She was a sales and marketing person. I got my head turned by publishing and that was it.”

In 1999, Murdoch joined Allen & Unwin in Sydney, working for the legendary publisher John Iremonger, who specialized in non-fiction and politics, and was a great mate of Gough Whitlam. There, Murdoch honed her style.

“I went into the editorial side of publishing, but I have never stopped feeling profoundly close to the people in sales, marketing and publicity. Early on at Allen & Unwin I got a reputation for haunting the marketing and publicity teams and trying to find out what they did. I feel that the more those groups talk to each other and the more connection publishers have to booksellers, the better things go.”

It was a fortuitous time to work for Allen & Unwin Australia. A&U had bought out their independence from the parent company in London, and ran a distribution arm for Bloomsbury Books, which published the Harry Potter debut in 1997. As the series kept flowing, the boost in profile and cash flow for the company was extraordinary.

She returned to New Zealand after she saw an ad for a job as publisher at Te Papa Press. “I knew I wanted to be a publisher,” she says. She was just 27 when she took on the coveted role at in 2003.

“Having spent that time at A&U, and having been at a lot of acquisitions and editorial meetings, it was very obvious to me that that was the direction in that industry I wanted to go in. Opportunities to jump into publishing roles when you are that young are quite rare. I really wanted to start to develop a list and have that experience. At Te Papa, it seemed like there was an opportunity to build a really powerful non-fiction list. So I went for it.”

Like all of Te Papa’s operations – including the catering and the carpark – the Press received some of its budget from the Crown but had to maintain financial sustainability.

“It had to be run with all the responsibilities of a normal commercial publishing house. You needed to have a responsible acquisitions meeting and you needed to be looking at the costings of books and making sure they stood up financially…The remit was non-fiction books about New Zealand. My focus was on the commercial book trade in that role. I was intensely focused because if real readers want what you are publishing and enough of them that they buy them in really good numbers, then you’ve done it right.”

But Te Papa Press’ fate started to change when former TVNZ boss Rick Ellis arrived as CEO in November 2014 and started what was described (in The Spinoff) as “a slow gutting” of the Press.

Actually, it wasn’t slow at all. The new management announced that four jobs would be cut and publishing suspended for five years. Prominent writers like Eleanor Catton and Jill Trevelyan, whose Te Papa Press-published biography of art dealer Peter McLeavey had won the NZ Post Book of the Year in the previous year, cried foul. A petition was set up. But Ellis’s message was loud and clear, and Murdoch walked in November 2015, leaving a job she’d held for 12 years.

Asked if that sequence of events was personally devastating, Murdoch pauses before responding. “I wouldn’t use those words myself. Te Papa had a bunch of other stuff they needed to do, and they determined to re-orient the museum’s operations around those other things. They had an innovation lab, a complete reconfiguration of all the public spaces. Museums have to change all the time to meet the needs of the audience.

“The interesting thing about the proposal to suspend print publishing is that I was blown away by the public response to it. It was powerful to see that ordinary New Zealanders in really significant numbers felt that publishing was an important part of the mandate of the museum. It really struck a chord. It was far broader groups of the public who clearly felt moved enough to communicate with the CEO about it.”