You are here: Home » Articles filed under: 'News' » Article: 'From Woodstock to Vietnam protests:'

From Woodstock to Vietnam protests: 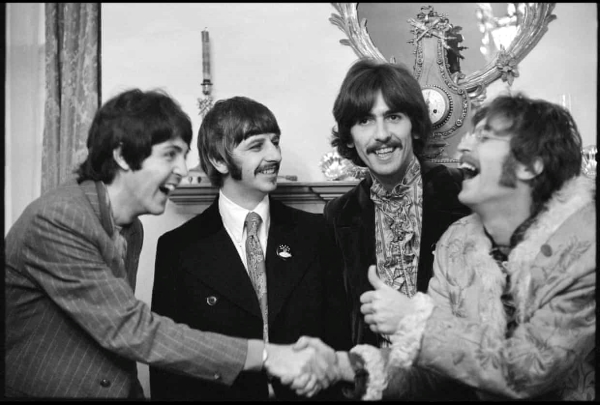 The exhibition explores the musical crossover between politics and culture in the 1960s and 1970s. Photograph: V & A.

‘Astonishing change can happen,’ says the curator of the V&A’s Revolutions: Records and Rebels

Short of travelling first class, John Lennon’s suit – as worn on the cover of the Beatles’ Sgt. Pepper’s Lonely Hearts Club Band – gets the VIP treatment on long-haul flights.

In preparation for the journey from London to Melbourne it was carefully dressed onto a mannequin – the fewer times you can dress a garment, the better – and tightly packed into a specialised case for minimum movement, then crated and air-freighted.

Its last leg, by road, was accompanied by three staff flown over from the Victoria and Albert Museum in London. They did the unpacking. Melbourne Museum had already had its temperature-controlled space checked and given a clean bill of health, and its own conservators installed the suit into alarmed cases under the watchful eye of the V&A staff. And when the exhibition in which it will be shown closes on 25 August, the V&A team will fly over once more, to reverse the process.

As the V&A’s blockbuster show of 2016, Revolutions: Records and Rebels (in the UK known as You Say You Want a Revolution) attracted nearly a quarter of a million visitors. Its latest incarnation in Australia contains more than 500 items from the V&A and Museums Victoria’s own collection, and has broadened in scope from 1966 – 1970 to 1966 – 1972.

Over here for the launch is senior V&A curator Victoria Broackes, whose previous exhibitions include David Bowie Is, which came to ACMI in 2015. Revolutions repurposes one of the key concepts from that show, using Sennheiser headphones that change the soundtrack automatically as you move through the exhibits. Broackes will present a lecture in the museum theatre about Revolutions’ design and development.

Broackes is thrilled with Melbourne Museum’s take on the exhibition, which covers around 950m2 of floorspace. One of Museums Victoria’s senior curators, Michelle Stevenson, led a team that added Australian stories, such as the 1967 Referendum; the rise of gay and lesbian rights at the end of the 1960s with groups such as Les Girls; Sunbury and the Nimbin Aquarius festivals; and the impact of the moon landings on Australian fashion and merchandising. (Belgium didn’t have much to add, Broackes says politely).

Then, of course, there was the local anti-Vietnam War movement, immortalised through items such as the broadsheet And This In The Name of Freedom, four million copies of which were distributed across Australia and New Zealand by the Vietnam Moratorium National Coordinating Committee in 1970.

These are scattered throughout the themed sections, which include Swinging London, complete with tiny Vidal Sassoon salon and record store; Consumerism and World Fairs, including an Andy Warhol soup-can paper dress; the Space Race; Gatherings and Festivals, which recreates the feel of Woodstock and includes Pete Townshend’s smashed guitar; and Communes and the Alternative Ideas, including the birth of Silicon Valley.

Broackes wanted the exhibition to explore the crossovers between politics and culture, and how those combined to create an era so enduring in the public psyche. “The spread of music among young people was what bound many of those aspects,” says Broackes, “whether it be protesting Vietnam or shopping on Carnaby Street.”