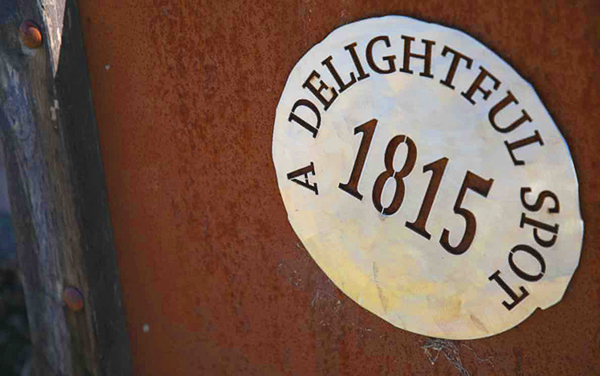 A sign at the Bathurst bowling club in NSW, built at a site where a number of Aboriginal people are said to have been killed and buried in colonial times. Photograph: Carly Earl/The Guardian.

Jack Latimore, There are few memorials to Australia’s bloody history but that’s changing, The Guardian, 5 March 2019

In the last two decades some community-driven memorials to Aboriginal resistance leaders have appeared.

• The Killing Times: the massacres of Aboriginal people Australia must confront
• A massacre map of the frontier wars – interactive

Growing up Aboriginal is to grow up acutely aware that at some point in the not-so-distant past your forebears survived at least one form of attempted massacre. For some Aboriginal people the reminders are a daily occurrence as we travel across our country: a painful past embodied in a sheer cliff face, a peninsula, a riverbank or an open plain where countrymen, women and children were slain.

I learned of the Myall Creek massacre in early high school and the graphic details of that atrocity nightly coiled in my mind. Around the same time I was made aware of a book titled Baal Belbora by a local white historian named Geoffrey Blomfield that revealed a multitude of massacres across my own country.

Blomfield’s book provides an account of the systematic attempt by white colonisers to eliminate Birpai and Dunghutti from the landscape via a series of “dispersals” in the 1820s and 1830s. One map illustrates the military manoeuvres used to drive the old people away from their coastal estates and into the harsh “falls country” that forms the natural western borders of these nations.

The intent of those manoeuvres was unquestionably, undeniably, the annihilation of the blacks: to terrorise them, to force the resistance into the precipitous hills, into impending starvation, where they would submit or perish.

Knowledge not contained within Blomfield’s book, but known by our great-grandfather who was born and raised in the first half of the 1900s, was a local massacre where violence more akin to the savagery of Myall Creek was perpetrated. In the early 1990s my great-grandfather even spoke at length to white anthropologists and historians about it. The records remain somewhere in government archives, filed away, disregarded.

Our family’s native title claim on the area did not succeed and, to this day, the site is not recognised as an Aboriginal place, let alone for the brutality that occurred there.

Warfare was the main form of contact between the colonial invaders and the Birpai and Dunghutti in those early decades, driven by colonial occupation and its exploitative resource extraction. The locals resisted an empire, yet no reference of their heroism is found in Australia’s national war memorial. Nor is the inclusion of this dark narrative likely in that institution’s future $500m “expansion”.

The same scenario is repeated in all the “frontier” wars that occurred across the continent as Australia’s colonies expanded. To paraphrase the national war memorial’s director, Brendan Nelson, this is the symbol of the price paid by First Nations lives for the freedoms white Australia enjoys and too often takes for granted.

Also little known is how these bloody confrontations continued to occur well into the 1930s, roughly 100 years after Myall Creek and three decades after federation.

But First Nations people are and have always been acutely aware of these atrocities.

In Fingal, a beachside village on the New South Wales north coast, there is a massacre site at the end of the spit. But visiting surfers and fishers could never suspect that Indigenous men, women and children were murdered on a slender plain visitors now traverse to access the beach.

Drive up the Bruce Highway from Mackay in north Queensland to a township known as The Leap and you will find a lanky wooden memorial beside a roadside pub representing a tragedy in 1867.

Local lore recalls that an Aboriginal woman, distressed, clutching her baby, leapt off the ledge of a nearby cliff. Her infant survived the fall and was taken into the care of a white family.

But a second version of events, not as widely recounted, says the woman and a number of her countrymen were driven off the cliff by white men and their agents.