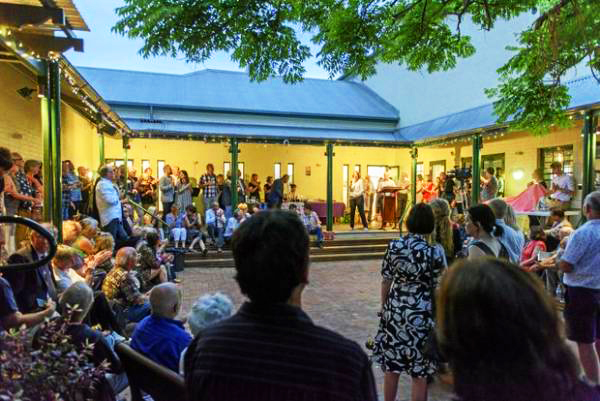 Judith White says its really not that hard to get arts funding right in NSW; we just have to drop the push for the icon building and think cross sector excellence.

It’s a sad reflection on the level of discussion about culture in the New South Wales Coalition government that when arts funding is mentioned to its representatives, they assume that you’re talking about a new building. Preferably one to which the dreadful words “iconic” and “world-class” can be attached. One that will satisfy the ambitions of a particular group among their own supporters, or help their standing in a particular electorate. One about which they can make a grandiose announcement, but not have to deliver the bulk of the money until after the next state election.

You and I know this as pork-barrel politics: promising a big-spending project to win a marginal seat. The NSW cash bonanza should provide the opportunity to rethink arts policy; instead we’re back to the art of the deal.

The burning issue that’s not being addressed concerns what is happening within our cultural institutions, large and small, metropolitan and regional, and how their ongoing operations are to be funded. You can build all the “icons” in the world, but if you’re not looking after what’s inside, they’ll never do for your city what the great museums of the world have done for theirs. The recurrent operational budget is critical.

In NSW, Premier Gladys Berejiklian’s government is not just standing still on this. It’s actually de-funding museums and galleries by means of the “efficiency dividend” – a cut in the operational budget, with mandatory reductions in employment. First brought in by the State Labor government in 2009 – more than two decades after it was introduced at federal level by the Hawke government – the misnamed efficiency dividend is applicable across the public sector at a current rate of 1.5% annually. From next year, that will increase to 2%.

The idea of reducing employment to increase productivity comes from the corporate world, from privately-owned industry. It’s a brutal measure and its results are doubtful but, in cases where fast-moving technology is changing production lines, you can see that to bean-counters it makes a certain kind of profit-hungry sense.

But it makes no sense at all in the cultural sphere, where technology can certainly assist many functions but can never replace the knowledge and craft involved in curatorship, public education, conservation and care for collections.

New South Wales, the most populous state in Australia, is not doing well in caring for its cultural institutions. In the current issue of Artist Profile magazine (Issue 40, p20) critic John McDonald writes about the “alarming picture of decline in the regional galleries of New South Wales”. A number of key local councils have cut recurrent funding, taking their cue from the State government and in some cases responding to State government threats of amalgamation by slashing budgets for cultural activities.

Grafton has cut its gallery’s budget by 50 per cent; Newcastle’s venerable art gallery remains without a director, as though curatorship simply doesn’t matter any longer. The allocation to the regions of $25 million a year for four years from the State’s cultural infrastructure fund, much vaunted by Arts Minister Don Harwin as a feather in the government’s cap, does absolutely nothing to redress the catastrophic budget position of these galleries which play a key role in the life of their communities.

As for the State institutions based in Sydney, I’ve written before about the skinflint attitude of the NSW Treasury compared with other states but to recap: The Art Gallery of New South Wales (AGNSW) in 2015-16 received $23.9 million of its $45.7 million operating costs from the State government, whereas the National Gallery of Victoria (NGV) received $46.2 million of its $83.2 million costs for the year.

The Museum of Applied Arts and Sciences (MAAS), encompassing the Powerhouse, the Sydney Observatory and the Museums Discovery Centre, received $34.2 million in recurrent funding from government in 2015-16 out of $58.1 million in operating costs. There’s no equivalent body in Victoria but the closest is Museums Victoria which also has three venues – the Melbourne Museum, Scienceworks and the Immigration Museum. In the same year it received $84.2 million of its $117.3 million operating costs from government.

Managements of NSW institutions naturally tend to dislike such comparisons with their southern counterparts. The point, however, is not to denigrate the State galleries and museums built by generations of fine professionals and good citizens, but to stress the need to work for better funding and a serious cultural policy. And to warn, once more, that the Berejiklian government’s recent headline-grabbing announcements about moving the Powerhouse to Parramatta and constructing a Sydney Modern extension to the AGNSW are heading for serious trouble unless adequate recurrent funding is secured for these brave-new-world buildings.

The NSW Upper House Inquiry into Museums and Galleries has been attempting, so far without success, to discover what the funding proposal is for the Parramatta move; its committee has yet to give serious examination to the issue of ongoing costs. The inquiry hearing originally scheduled for September 11, at which Premier Berejiklian and her predecessor Mike Baird were reportedly to be asked to appear to answer questions about the secretive business case process, was called off at short notice and has yet to be rescheduled. Wouldn’t you like to know what’s going on about that in the corridors of power!

It’s widely accepted these days that public institutions have to help cover their costs from exhibition ticket sales, catering and shop revenue. But none worth its salt gets by with less than about 50% government funding. In most cases that’s the minimum needed to keep entrance free to the public and maintain any level of quality in programming and care for the collection.

There are of course other models for arts funding than those which obtain in Australia’s public institutions. The great museums of the US rely on huge endowment funds built up over the years by wealthy donors. New York’s Metropolitan Museum of Art (the Met) has an endowment fund of $US 2.5 billion which provides the bulk of an annual operating budget of more than $US 300 million. The mind-boggling wealth of American corporate titans also funds the extraordinarily rich collections of these museums. Australia simply has no comparable tradition of philanthropy, in either endowment funds or collection giving.

In Europe, by contrast, it has been traditionally accepted that it’s part of the role of government to fund culture. The European Union (EU) itself helps fund needy cultural institutions throughout the continent. In economically beleaguered Greece, for example, its flag flies alongside the national flag outside numerous classical monuments and major museums.

In France, while there has been constant pressure on institutions to increase their earnings (the Louvre now has effectively to match the €122 million a year it receives in government funding), no party questions the need to provide cultural funds. Faced with financial insecurity and the damage to tourism done by terrorist attacks, last year the government of President François Hollande announced that cultural spending would actually increase by 6.6%, to €2.9 billion. Emmanuel Macron, elected President in May this year, came in with a ruthless cost-cutting agenda but has yet to reverse this particular increase; rather, he announced the populist measure of giving every person reaching the age of 18 a €500 voucher for cultural expenditure. Imagine an Australian government of any political persuasion doing likewise for the country’s youth!