You are here: Home » Articles filed under: 'News' » Article: 'Future of Endeavour' 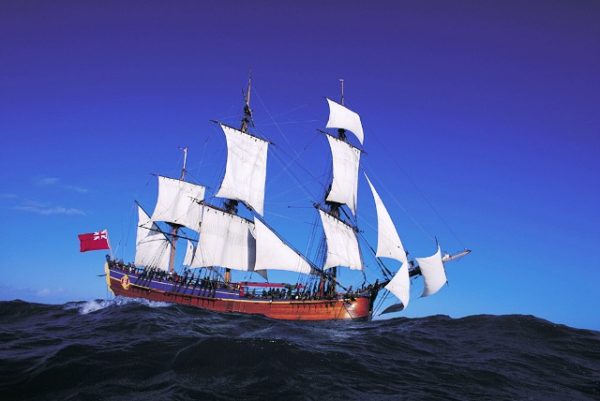 An HMB Endeavour replica under full sail in the Coral Sea (AG#44). The original, it has been discovered, has most likely lain wrecked in Newport Harbor, Rhode Island for more than 200 years. Image Credit: Mike McCoy / Australian Geographic.

Richard Scott, Fight over the bones of Captain Cook’s Endeavour, 6 May 2016

After 238 years, the hunt for the wreck of Endeavour may finally be over – but what will become of this famous ship?

Just eight years after Captain James Cook first sailed the Pacific seas, HM Bark Endeavour was sold, scuttled and sunk without a trace. This week, US marine archaeologists claimed to have discovered her remains in Newport Harbor, Rhode Island – but what will become of our most famous ship?

In her glory days, the Endeavour helped Cook circumvent the globe, map the south-west Pacific and claim Terra Australis Incognita in the name of the Crown. But by 1778, the ship – then renamed the Lord Sandwich – was all but forgotten, loaned out by the British Navy, and purportedly scuttled during the American War of Independence.

Now, 238 years later, researchers with the Rhode Island Marine Archaeology Project (RIMAP) are “80 to 100 per cent” certain that the Endeavour is one of 13 shipwrecks at the bottom of the Newport Harbor.

“The Endeavour holds a hugely significant role in Australian history, for better or worse,” said Kieran Hosty, manager of the Maritime Archaeology Program at the Australian National Maritime Museum (ANMM).