You are here: Home » Articles filed under: 'News' » Article: 'The Future of Museums'

The Future of Museums 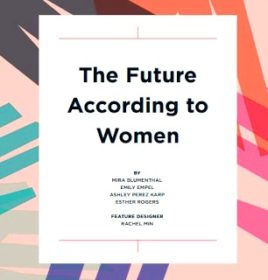 I was delighted to be interviewed for an issue of MISC Journal devoted to The Future According to Women. As the introduction notes, “The future we read about is made up of recycled bits of interviews curated from the minds of a few great men innovating in Silicon Valley.” To counterbalance this bias, the editors decided to explore what would happen if they “purposefully built a view of the future curated entirely from the perspective of women.” The resulting essays, available as a free download, explore a range of topics from the future of gender and identity to the future of war. Museums are represented via a brief quote from me, and MISC published the full text of that interview to the web. With their permission, I’m reposting it here on CFM. MISC is a journal devoted to strategic insight and foresight, and it would be a great addition to any museumer’s scanning feed.

While the next era of education might seem uncertain for some, women like Elizabeth Merritt have a clear cut idea of what it will look like. Elizabeth is VP Strategic Foresight and Founding Director at the Center for the Future of Museums. She views museums as playing a vital role in the learning landscape, and foresees them becoming increasingly interactive over time. Not only will museums extend beyond their physical confines and continue to develop compelling digital content, but, by 2050, Elizabeth envisions museums to become technologically advanced sites where children will be able to participate in the history they’re learning. “You think some kids are dinosaur-obsessed now? Wait until they can spend their play time helping a curator on her latest paleo dig in Outer Mongolia, or 3-D print the most recently catalogued species!”

I think museums, collectively, will play a lot of different roles, just as they do now: repositories of art, history, and science; places of reflection and remembrance; community hubs; social spaces and catalysts in the creative economy.

There seems to be a consensus, among both futurists and educational reformers, that we are on the cusp of transformative change in the US educational system, particularly in what is now tagged as P-12. (Though note that age-based “grades” are one of the many elements of the current system being called into question). No one knows exactly what the next era of education will look like, but when you ask people to characterize the direction we’re moving in, certain descriptors come up repeatedly: passion-based, self-directed, personalized, hands-on, experiential. Well guess what? Those adjectives describe the kind of learning experiences museums provide now. I imagine that by the turn of the next century, we may have moved towards a distributed learning system – one in which children have a lot of options for when, where and how they learn, drawing on a network of learning resource embedded in their communities and via the web. And museums will be vital parts of the learning landscape – both as physical spaces and as providers of compelling digital content.