You are here: Home » Articles filed under: 'News' » Article: 'Future of NFSA'

It goes without saying these are difficult times for the country’s museums and archives. In recent months, the National Library, War Memorial, Powerhouse Museum in Sydney, and others, have all flagged belt-tightening and cutbacks to services or staff.

But the response to cuts at the nation’s leading repository for film, radio and television, the National Film and Sound Archive (NFSA) may be unique. This month, the NFSA has been conducting a fence-mending exercise with its stakeholders after a restructure, detailed three months ago, drew an angry reaction.

Who has a stake in the NFSA?

In April, the NFSA management announced cuts to its programs, after a six-month review of its operations. Some 28 staff – 13% of the Archive’s total workforce – were put off.

Members of the Archive’s constituency, including leading film and program makers, critics and researchers, demanded an explanation, citing the human cost and the lack of prior consultation.

None of this should have come as a surprise to the Archive’s executive.

People who work in the film, video and audio industries draw on the Archive for their productions. But they also rely on it to ensure the long-term preservation of their work. Audio-visual materials date with each technical advance and are thus more difficult and expensive to maintain than printed works. So program makers generally have a deeper relationship with the NFSA than writers, say, have with the National Library.

Moreover, the NFSA’s stakeholders have been fundamental to its history. In the early 1980s they lobbied to have the audio and moving image collection made independent of its then-home, the National Library. They were active again when the Archive was absorbed into the Australian Film Commission in the early 2000s. The NFSA has been a statutory authority since 2008. 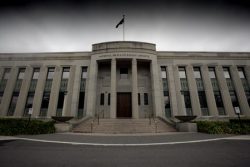 NFSA building, Canberra. Source: NMA
Positions Vacant » View All
» Kaituhi Maori / Maori writer – Te Papa
» Interpretive Planner – AWMM
Latest News » View All
Powerhouse’s 5 new exhibitions
Eucalyptusdom to Electric Keys Read more.
10 new art museums
Opening globally in 2022 Read more.
“Activating Smithsonian Open Access”
- new models for interacting with collns Read more.
Outback Museum of Australia, Charleville
$8.34M through in Building Better Regions Read more.
British museums face long Covid’s effects
visitation halves from pre-pandemic levels Read more.
Top +
Council of Australasian Museum Directors, c/o Ms Daryl Karp, Museum of Australian Democracy at Old Parliament House PO Box 3934 Manuka, Australian Capital Territory 2603 Australia, © CAMD 2021
Copyright: All information and resources provided on this website remain the copyright of the Council of Australasian Museum Directors. Permission is granted for viewing and downloading for personal and not for profit purposes. Those wishing to reproduce any materials for commercial, educational or other uses are requested to contact us.
Disclaimer: The content of this website is provided for information purposes only and is not intended as a substitute for professional advice. No claim is made as to the accuracy or authenticity of the content of the website. The Council of Australasian Museum Directors does not accept any liability to any person for the information or advice (or the use of such information or advice) which is provided on this website. The information on our website is provided on the basis that all persons accessing the site undertake responsibility for assessing the relevance and accuracy of its content. No responsibility is taken for any information or services which may appear on any linked web sites. Hostgator.
.