Future-proofing museums: Elizabeth Merritt, founding director of the Center for the Future of Museums, on the digital revolution and the power of technology. 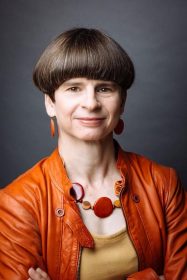 Elizabeth Merritt, founding director of the Center for the Future of Museums.

Elizabeth Merritt is in a unique position to analyse the future of museums and collections.  In the first of two discussions, she talks about how she came to the American Alliance of Museums and how the CFM came into being

The Center for the Future of Museums (CFM) aims to future-proof museums.  It monitors key trends that influence museums – scrutinising cultural, political, technological and economic factors.  Under the aegis of The American Alliance of Museums (AAM), the Center’s remit is, not only to help museums address challenges, but to build firm connections between museums and educational, corporate, civic, non-profit, and government organizations.

Elizabeth Merritt founded the CFM in 2008.  She now holds the position of Vice President for Strategic Foresight.  As the CFM enjoys its tenth anniversary, she spoke to Blooloop. She explained what led her to found CFM and how she sees it contributing to the future of museums worldwide.

An enduring love of museums

Merritt’s love affair with museums started early.  At the age of 11, she started volunteering for the Cleveland Museum of Natural History. She spent as much time as she could at the museum’s live animal care programme.   “It was marvellous,” she recalls, before commenting wryly:  “I think it gave me a better education than school did, frankly.”

Evolution of animals (and museums)

Her interest in animals continued through college. She attended Yale where she took courses in biology and also volunteered at the Peabody Museum of Natural History. Merritt then attended graduate school at Duke University in a programme for animal behaviour.   She often allies her biology background to the question of museums.  In a public lecture at Smith in 2015, she said, “Museums and archives can adapt or die. Or maybe they can become remnant species, surviving in a very restricted niche.”

Merritt herself is the queen of adaptation.  In graduate school she ended up in a molecular biology lab. However, while she found biology fascinating, she soon realised she didn’t want to spend the rest of her life in a laboratory.  She also realised that her Jane Goodall ambitions had waned. She didn’t want to spend her life out in the wilds either. So, having gaining her master’s, she decided to regroup. “I spent time reflecting on the question I encourage everyone to ask themselves. What do I think would be the best job in the world?”

After only a short period of reflection, she realised her ideal job would be found inside a museum.

“I sat down and wrote a letter to every single museum in Massachusetts,” Merritt recalls.  “I sent them a copy of my resume, and asked them for a job.  It was a crazy strategy for finding a job.”

It may have seemed crazy but it worked.  Merritt was then offered the position of curator of a small nature centre and children’s museum in South Dartmouth, just outside New Bedford.

She then started what was to become a lifetime commitment to continued professional training. Her first step was a training programme at the Los Angeles County Museum of Natural History. This aimed to develop a standardised curriculum for training people in collections management.

“It was wonderful training,” says Merritt.  “I met all sorts of important, brilliant people in the conservations and collections management field.”

The public role of museums

The City couldn’t figure out how to make the old building financially viable.  As the various museums in the city discussed merging, the idea of relocating to the train station was mooted.  The City offered support, and said the museums could lease the building for a dollar a year.

“So we ended up by having a history museum and a history archive and a natural history museum,” says Merritt.  “Eventually we merged with the local children’s museum as well, and a small American gallery run by a local society.”

Merritt eventually became the Director for Collections and Research for the whole institution.  “So I got some experience working with archives, and history, and, of course, reapplying what I had learned in children’s museums to the new and larger children’s museum that was incorporated into the Cincinnati Museum Center.” She also gained experience in broader areas of museum practice, learning budgeting, planning and financial strategy alongside the vital art of engaging the public.

“I went from being very collections and interior focused, to taking a look at the public role of museums, and how they engage with audiences.”

She then made the move to the American Association of Museums (now the American Alliance of Museums), in Washington DC. Initially she ran the Museum Assessment Program. Then, after a few years, she became director of all the excellence programs, including accreditation.