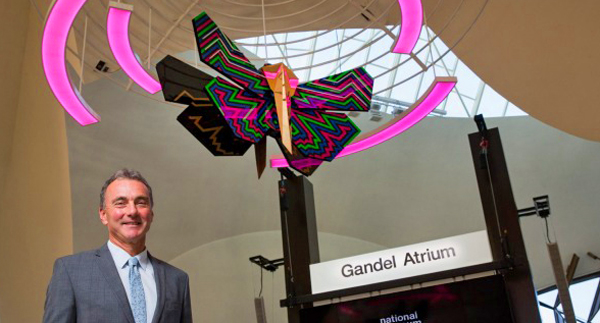 “Having the Gandel name associated with the museum has been as important as the material support they have given,” Dr Matthew Trinca said. Photo: Jason McCarthy.

He owns half of what’s touted to be the biggest mall in the southern hemisphere: Melbourne’s revamped luxury retail cash cow, Chadstone Shopping Centre – and he’s one of Australia’s wealthiest men.

But it seems John Gandel is heading back to school. Well, sort of.

As Mr Gandel prepares to hand the National Museum of Australia a cheque for $1.5 million on Tuesday May 15 – to help the museum establish an innovative digital history program that will be available to classrooms across Australia – he urged fellow entrepreneurs to value the critical role of storytelling.

And to give generously to ensure our cultural institutions can preserve and pass on Australia’s multi-faceted history.

“As our population expands, it raises the question ‘what do you give people?’ Beyond infrastructure, how do you not only accommodate people – but also help to make life good for them here?” said Mr Gandel, 83, whose Polish parents migrated almost a century ago to Australia, where he was born in 1935.

“I think the answer is you give them more culture; a broader education, some breathing space – places they can go to relax, have an experience, and most important, learn,” Mr Gandel told The Australian Financial Review in an exclusive interview .

“People need to learn both the good and the bad things about what happened here in the past so they can decide their values and make their choices for the future.”

John and wife Pauline Gandel’s gift is the largest single donation ever received by the NMA and comes on the back of a raft of donations the family’s philanthropic arm has made recently to other cultural institutions, including the Melbourne Museum and National Gallery of Victoria, as well as Cabrini Hospital in Malvern.

According to the Support Report, released last month by JBWere, High Net Worth Individuals such as the Gandels donate the most money to universities, followed by cultural and arts institutions, then health and medical research in third place.

Over the past 40 years, Gandel Philanthropic has given away more than $100 million.  Mr Gandel is ranked in the top 10 of the 2018 Rich List, to be published in The Australian Financial Review Magazine on Friday May 25.

“It’s important not to forget our cultural institutions,” Mr Gandel said, adding it wasn’t just the responsibility of governments to fund them.

“A lot of people in the top bracket are realising they have made sufficient money in this country to look after their family. They have a lot left over, and that’s how we feel as a family. My children don’t work directly in the business, but they all share the sense of philanthropic obligation.”

The Gandels gift will be rolled into the $6.5 million Defining Moments Digital Classroom initiative, which will allow students to explore the key moments that have shaped Australian identity and culture through interactive smartboards, iPads, videos, virtual tours, 3D scans and digital trivia quizzes.

The NMA has an annual budget of about $50 million, of which  20 per cent is self-sourced.

“Over the next few years, we are looking to double that to 40 per cent of our revenue being self-generated, including commercial activity, philanthropic and corporate sector support,” said NMA’s director, Dr Mathew Trinca, explaining more private public partnerships or PPPs were the future.

“Having the Gandel name associated with the museum has been as important as the material support they have given,” Dr Trinca said.

“I have to pay tribute to their foresight and vision in understanding the importance of communicating who we are as Australians, and in enabling that storytelling in schools right across the country, not just in Canberra where the museum is located.

“Our view is that our future is predicated on the quality of these PPPs.”

The Gandels will join Dr Trinca, the Federal Minister for Communications and the Arts, Senator Mitch Fifield, and others at the NMA on May 15 for the unveiling of newly named Gandel Atrium. It’s the first time the National Museum has named any public area after a significant business person.