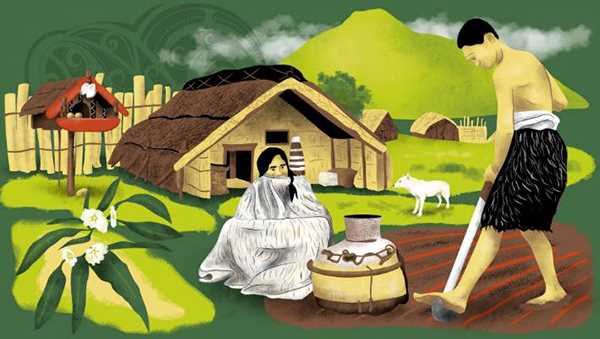 Prior to the arrival of the first European settlers, each village was surrounded by food gardens. Kathryn George.

What were the tools used by Māori to cultivate crops and staple foods such as kūmara, taro and fern root before European arrival?

About 20km from the Waitangi Treaty Grounds, where annual celebrations mark the birthplace of this nation, I discovered that the answer to this question spins yet another fascinating tale of developing relationships between Pākehā and Māori.

Prior to the arrival of the first European settlers, each village was surrounded by food gardens, its residents tasked with cultivation using wooden implements of various shapes and sizes, such as the paddle-shaped ketu. We know this partly because many years later in the Waimate Taiamai area, local farmer John Finlayson discovered a treasure trove of gardening artefacts buried on his property. He came across more than 30 pre-European tools over the years, including patu aruhe (used to pound fern root, a staple food, but the fibrous root needed to be broken down to make it edible), kō (for digging) and ketu (for loosening the soil) of various shapes and sizes made from a variety of wood.

Museum of New Zealand Te Papa Tongarewa likens the kō – the most widely used of all Māori agricultural tools – to the hoe. It was sometimes used with the teka (foot tread) as a spade. The museum also lists timo as a major tool; they were used as grubbers for loosening soil and were often made from a forked branch with a flattened blade and a round handle. 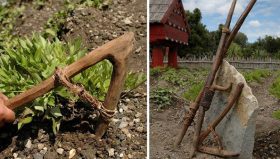 Traditional gardening tools recreated at Te Parapara, the Māori garden at Hamilton Gardens: including two ko (for digging) and a timo (for weeding and mounding).

John registered the collection with the Ministry for Culture and Heritage in 2007, then set about returning the taonga to the local marae: Parawhenua, Rawhitiroa and Tauwhara. All were finally returned in April 2018 following the development of a relationship between John, his son Cameron, the ministry, Auckland Museum, Auckland University and the chairs of the three marae.

The return of the taonga was significant, says Parawhenua Marae chairwoman Hinerangi Himiona. Not only did the marae chairs support each other to work through the process of obtaining ownership through the Taonga Tūturu legislation and process, a deep appreciation developed between local hapū, marae and John, who passed away in 2017. “Only the generation before us and certainly in our grandparents’ time, the relationship between local Pākehā [mainly farming families] and local hapū was close,” Hinerangi explains. “They were relationships across real and vibrant communities. This engagement was a reminder that we all still share these beautiful lands.”

The Taiamai plains were known for the rich fertile soil, plentiful fresh water sources and proximity to both the east and west coasts. Their tūpuna occupied and defended their place here for many centuries, Hinerangi says, and the tools were absolutely essential as the area’s economy was based on agriculture and horticulture. “They were great gardeners and had lots of knowledge about the environment and seasons for growing kai, harvesting and caring for the environment to ensure it was able to keep providing sustenance for them and the generations to come,” she explains. “The mana of the hapū of this area was around their ability to produce large quantities of grown produce. In order to do this, the technology available to them and the innovations around this were paramount.” 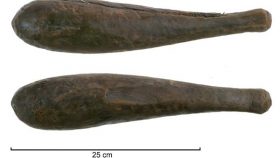 When artefacts are found, he explains, they are registered with the Ministry for Culture and Heritage before being passed on to a local museum. “Once ownership of the taonga is secured, normally through the Māori Land Court, then a decision is reached to either have them displayed in the local museum or marae.”

The three marae that now share the gardening taonga have agreed to display them. “For our people and our manuhiri, to remind us who and where we come from and inspire us to learn more and revive the practices of our ancestors,” says Hinerangi.

The maramataka is a complex system traditionally used by Māori, described as a template for survival in modern times – view video.

The marae also plan to host educational opportunities, using the taonga as teaching and learning tools for their own gardeners, along with schools, tertiary providers and local gardening groups. “Not only does the return of this collection provide interesting artefacts for our whānau to learn more and talk about, it also signals the return, recovery and revitalisation of our Māori cultural identity within our own cultural institutions and control.”