You are here: Home » Articles filed under: 'News' » Article: 'Gender and the Museum'

Gender and the Museum

Yasmin Khan, ‘Sex equality must be pushed higher up the museum agenda’, The Guardian, 9 June 2014

Can today’s museums really be seen as beacons for upholding values such as social justice, inclusivity and wellbeing if their internal operations tell a different story? This was one of the central questions asked in my ongoing research into museums and gender. What I’ve found is that the reality of working in the sector does not always correlate with its projected vision, particularly when it comes to the sexes.

Here are some of the main issues I’ve uncovered along the way, and a few questions I think need to be asked (and answered).

Governance and patriarchy
An ongoing challenge for museums is achieving gender parity at board level. As David Lammy, MP for Tottenham, acknowledged in 2007, national museum boards are particularly “pale, male and stale”. UK government statistics show that only 38% of public appointments made by DCMS in 2012-13 were women. Similarly, according to my own research, 32% of current board members across Arts Council England’s (ACE) major portfolio museums are women.

Data from individual museums for comparative analysis remains elusive; routinely gathering and sharing reliable data on gender diversity continues to be a weak spot in the museum sector.

The National Museum Directors Council (NMDC) membership data shows an ongoing gender imbalance at director level, although the balance drastically improved in 2012 when membership was expanded to include directors of regional museums. Currently, 31% of NMDC’s membership is female.

In Washington, Maryland, roughly 50% of museum directors are women, but this is in stark contrast with the rest of the US, where just five of the 33 most prominent art museums have women at the helm.

Disconcertingly, the gender gaps in directorship are more glaring in museums with budgets that exceed $15m (£8.9m); larger museums are more likely to be run by men. Perhaps we could look to Poland, where according to the online magazine Culture.pl, all the most important national museums and state-owned contemporary art galleries are headed by women.

Perceived feminisation of the workforce

The creative industries stats site Data Generator reveals that museums are overrun by women: the proportion of people working in cultural heritage has been steadily around 40% male and 60% female. These figures are the inverse for the cultural sector overall, where men outnumber women. However, what is not yet clear is the exact proportion of men and women throughout the museum ranks and across the regions. Interestingly, we do know that for ACE’s major portfolio museums, women account for a larger proportion of specialist staff (63%) and volunteers (65%) when compared with other types of role.

“Museums are famously a low-pay sector,” admits the outgoing director of the Museums Association, Mark Taylor. As women climb to the top, is there an honest and clear reason for a discrepancy of income compared with their male counterparts?

The Gender Gap Report, published by the Association of Art Museum Directors, is a compelling read: on average, female art museum directors in the US earn 79c for every dollar earned by their male counterparts. Again, we don’t yet have comparative data for the UK.

A number of museum personnel I contacted as part of my research did mention the working mother’s conundrum. As put by Caro Howell, director of the Foundling Museum: “The biggest issue is the perennial problem: salary versus childcare costs.”

Tony Butler, director of Derby Museums Trust, says: “Family-thoughtful organisations are better for all.” However, the majority of staff still crank under an antiquated, industrial working model that predates museum origins. Conventional working conditions and standard HR policies do not necessarily lend themselves to cultivating creative outputs required of staff.

Do we need to think more like commercial companies such as Google and Timpson, who have come up with manifestos for more innovative and flexible ways of working? Let’s inject some of the out-of-the-box thinking that shapes our exhibition displays into imagining less stifling work models that can actually enhance the quality of our creative outputs and better serve staff wellbeing.

Read more at  The Guardian. 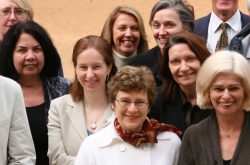 CAMD women directors, 2007 Meeting
Positions Vacant » View All
» Exhibition Experience Developer – Te Papa
» Operations & Science Centre Mgr – Otago Museum
Latest News » View All
MA Museums Change Lives Awards
2021 Shortlist announced Read more.
Tattooing as a cultural phenomenon & art
form – historic & current challenges Read more.
Oriel College’s retain & explain plaque for
Cecil Rhodes statue – what’s balance? Read more.
City of London to retain & explain statues
- Guildhall’s slave trader policy reversal Read more.
What to do if you find fossils or artefacts
A history worth protecting Read more.
Top +
Council of Australasian Museum Directors, c/o Ms Daryl Karp, Museum of Australian Democracy at Old Parliament House PO Box 3934 Manuka, Australian Capital Territory 2603 Australia, © CAMD 2021
Copyright: All information and resources provided on this website remain the copyright of the Council of Australasian Museum Directors. Permission is granted for viewing and downloading for personal and not for profit purposes. Those wishing to reproduce any materials for commercial, educational or other uses are requested to contact us.
Disclaimer: The content of this website is provided for information purposes only and is not intended as a substitute for professional advice. No claim is made as to the accuracy or authenticity of the content of the website. The Council of Australasian Museum Directors does not accept any liability to any person for the information or advice (or the use of such information or advice) which is provided on this website. The information on our website is provided on the basis that all persons accessing the site undertake responsibility for assessing the relevance and accuracy of its content. No responsibility is taken for any information or services which may appear on any linked web sites. Hostgator.
.