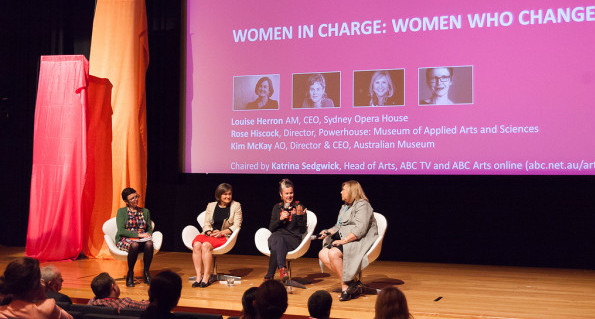 Ashleigh Wadman, Want to smash the glass ceiling? Its time for some DIY, ArtsHub, 20 March 2015

There is a great deal women can do to address the gender disparity in museum leadership.

International Women’s Day on 8 March raised many questions and statistics exploring the structural inequality between the sexes in Australia. Only four days previously, Gina Fairley asked us if women in the museum sector were smashing the glass ceiling to achieve leadership positions. Unfortunately, not even this sector could escape a few damning revelations …

The consensus was that while progress is occurring, the march towards it is slow with a chronic lack of female leadership at state and national level. For example, two of the five primary cultural institutions under the New South Wales [Government] are led by women and of more than 20 directors in the Council of Australasian Museum Directors (CAMD), only five are women.  Going some way to tip the balance was the announcement last week that Janet Carding will take over as the new Director of the Tasmanian Museum and Art Gallery (TMAG). However, this is the first of our State art museums to appoint a woman since Betty Churcher held positions at the AGWA and NGA in the 1980s and 90s respectively.

Save reviews similar to 2012’s Women in Theatre research report and action plan for the Australia Council or the installation of a quota system, action seems to come in the form of museums, galleries and their associations programming professional development into their outreach activities. Hiscock mentions that CAMD will this year introduce a mentoring program. She and McKay will work to realise that vision. My own research revealed that the Nelson Meers foundation with Creative Partnerships Australia and Chief Executive Women provides three scolarships specifically designed to develop the leadership skills of women working in the cultural sector.

But what about those of us that cannot, for a multitude of reasons, access these resources? For those of us left behind I propose action on a grassroots level, to form networks of diverse arts professionals to upskill each other …