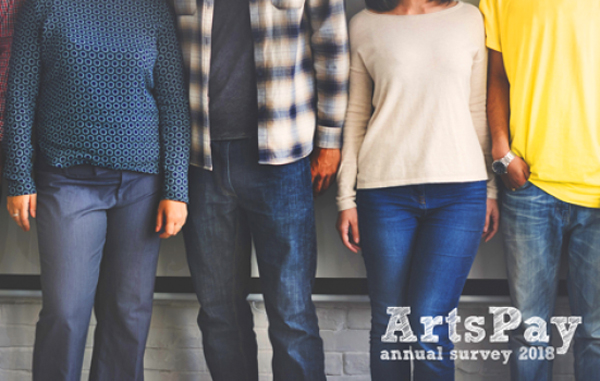 Lack of career progression among women in the cultural sector is the overwhelming contributor to the significant gender pay gap revealed in initial findings from the 2018 ArtsPay survey.

The gender pay gap in the arts is showing no signs of abating, with women being only half as likely as men to reach senior roles by their mid-30s, and on average earning less than men as their careers progress.

Figures drawn from ArtsProfessional’s 2018 online survey of pay and earnings reveal that on average, women in full-time employment in the cultural sector earn 10.6% less than men.

Only 15% of women under the age of 35 are in senior roles, compared with 31% of men
Career progression appears to be the most significant contributor to this. While only one in six of those at an early stage of their career are men, at senior levels men take almost one in three of all roles.

Government figures reveal that the disparity is not confined to smaller organisations, but is most evident in some of England’s largest National Portfolio Organisations.

The survey, conducted by ArtsProfessional in September and October this year, attracted over 2,600 respondents working in or with the arts sector in the UK. Based on this sample, it provides an indication of average pay for full-time workers, the hourly and daily rates earned by part-time and freelance workers, and the earnings of business owner/managers.

The findings reveal a significant gap in earnings between men and women in full-time employment, with the average (median) salary for men being £33,000, while the equivalent figure for women is £29,5001.

Among part-time employees the picture is less clear due to the dominence of women in this type of work. 88% of the 323 part-time workers who responded to the survey were women, with an average salary of £28,000. The average for the 40 men working part-time was £27,250.

A gender pay gap is also found among business owner-managers, with men earning an average of £1,000 more than women. But both men and women report earning significantly less from their businesses than those employed by other organisations, and the headline findings are likely to be masking other factors influencing earnings. Many of these small enterprises employ only one or two people, some of whom earn income from a range of sources, of which their business is just one.

There is little to suggest any gender pay differentials among freelance workers, though the diverse nature of freelance work in the cultural sector makes comparisons difficult.

While for some freelance workers, their earnings in the sector form the majority of their total earnings, for others they supplement an income from employed work or from freelance activity outside the cultural sector.

Further analysis is needed to draw clear conclusions about both freelance workers and business owner/managers. 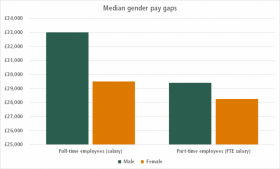 Deeper analysis of the survey findings indicates that the gender pay gap is significantly related to progression, and there is strong evidence to suggest that this is the root cause of much of the observed pay inequality.

Only 15% of women under the age of 35 working full-time are in senior roles, compared with 31% of men in this category. 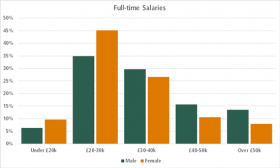 Of those who self-define as being ‘senior level’:

There is also evidence to suggest that there are some gender pay differentials between full-time employees working at similar levels of seniority.

These new figures are broadly in line with other pay research conducted in the cultural sector – and in the wider economy – in recent years.

Comparisons with research by ArtsProfessional in 2015 suggests that the pay gap may be narrowing very slightly. It found women earning up to £5k less than men at similar stages in their careers, with an average salary of £32,500 for men employed full-time, compared with £28,500 for women.

More recently, the government has required employers in the UK with more than 250 staff to publish their gender pay gaps in a searchable database. This revealed that over 77% of the UK’s medium and large enterprises pay women significantly less than men.

This is reflected in the cultural sector. In 2017, the latest available figures, a significant majority of the biggest employers reported that, on average, their female employees earned less than the men. Some of Arts Council England’s National Portfolio Organisations (NPOs) receiving the highest levels of public funding were among those with the biggest gaps.

NPOs where women’s median earnings were significantly lower than men included Southbank Centre (-18.3%), which hosts the Women of the World Festival, founded in 2010 by former artistic director Jude Kelly to celebrate the achievements of women and girls and look at the obstacles they face.

A spokesperson at Southbank Centre told AP: “Southbank Centre takes gender pay balance very seriously and we have an excellent track record in employing women. We have been a Times Top 50 Employer for Women for three years in a row. 64% of our Executive team are women and 40% of our Board including both the Chief Executive and the Chair.

“We work hard to reduce our gender pay gap which we have identified is partly due to a large percentage of part-time employees (the majority of whom are women), and by the under representation of women in our technical roles. Our policy is to pay the same rate for the same role and for roles of equal value.”

The gap at Sadler’s Wells was -16.1%, despite the organisation  having mistakenly reported it as zero earlier this year.

Alistair Spalding, Artistic Director and Chief Executive, told AP: “We are truly sorry that our gender pay gap had been inaccurately calculated. This has been rectified and the revised figures have been updated in our report.

He added that, despite the gender pay gap, he was “confident that men and women are paid equally for doing work of equal value at Sadler’s Wells”, and explained that they “regularly carry out equal pay reviews to ensure this”.

At the other end of the scale, a pay gap in favour of women was reported by a few organisations, including National Museums Scotland (+15%), the National Theatre (+3%) and English National Opera (+1%).

A National Museums Scotland spokeswoman attributed this to rigorous recruitment and equal opportunities policies. She said: “Our recruitment process is competency based, which ensures all applicants are fairly assessed. Based on this selection process we currently employ more women than men which is reflected in the findings of the survey and the subsequent gender pay gap found in favour of female staff. The difference in average hourly pay rates also evidences that we have more women than men working in senior management roles.

Gender equality charity The Fawcett Society states that “a failure to properly recruit or promote women” can be at the heart of the gender pay gap.

It recommends a series of steps that employees can take to tackle gender pay inequality, including sharing information about pay with co-workers, joining a trade union, and asking employers to provide a report and action plan addressing the issue. The society urges employees to tweet using the hashtag #GenderPayGap to keep the discussion going.

For employers, it says calculating an organisation’s gender pay gap is the first step to addressing the problem, then looking for the causes and developing an action plan.

Managers, they say, should ask themselves questions about:

On behalf of Sadler’s Wells, Spalding said: “We know that there is much more we can do and recognise the need to take prompt action. We have interrogated our figures to better understand and address the issues behind the disparity and our recruitment practices are being revised to support a more equal gender distribution across the quartiles reported upon.”

A spokesperson told AP that Southbank Centre is giving women more support to take career paths in roles that have typically been taken by men, such as production and technical roles. She said: “We promote these career opportunities in schools and offer apprenticeships and starting opportunities in roles where women are historically underrepresented.”

This is the first of a series of articles relating to the findings from the 2018 ArtsPay survey. Findings based on further analysis will be published in the coming months. ArtsProfessional would welcome conversations with academic institutions and other bodies interested in having access to the wholly anonymous data set to conduct further analysis that will shed more light on pay practices in the cultural sector.