June 11th, 2021 | Browse other: News. | Tagged with: book launch of ‘Who Owns History? Elgin’s Loot and the Case for Returning Plundered Treasure‘, Geoffrey Robertson QC holds Australian launch for book on the return for the Parthenon Marbles | 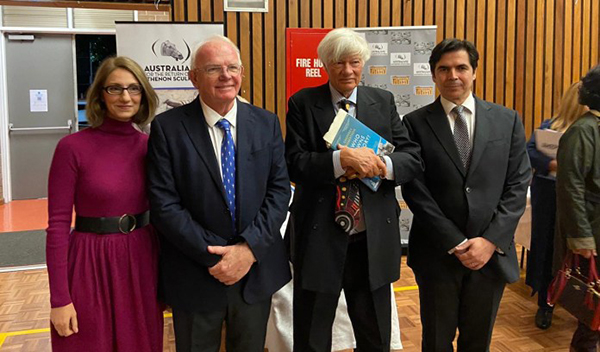 Greek Sydneysiders flocked to the Governors Centre at Moore Park on Saturday night to attend the book launch of ‘Who Owns History? Elgin’s Loot and the Case for Returning Plundered Treasure‘, written by Geoffrey Robertson QC.

The evening celebrated the launch of the book in Australia and was hosted by Jim Tsolakis, Secretary of the Athenian Association of NSW.

For his book, Robertson focuses his razor-sharp mind on one of the greatest contemporary issues in the worlds of art and culture: the return of cultural property taken from its country of creation. Specifically, Robertson observes the British Museum’s withholding of the Parthenon Marbles; A treasured piece of Greek history that is being kept in a foreign land.

“…What is undoubtedly the greatest survivor of the ancient world. The Parthenon Marbles. To see them together, reunified under a blue, Attic sky,” Robertson said. 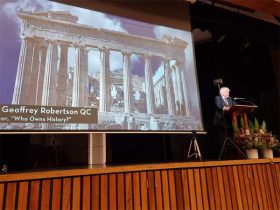 Robertson says the naming of the ‘Duveen gallery’ in the British Museum, which currently holds the Parthenon Marbles, is representative of the way Duveen stole the cultural history of the ancient Greeks.

“He bought the Duveen gallery and do you know the first thing he did? He said ‘I want those marbles whiter than white’. And of course, they weren’t white! In Greece they were a riot of colour, that was what made them stand out.”

“But, he paid for workmen to use crowbars and chisels to get all the original paint off the marbles so they could be Hellenistically white.”

Geoffrey Robertson has had a distinguished career as a barrister and human rights advocate, serving as a UN war crimes judge, counsel in many notable Old Bailey trials, and has won landmark rulings on civil liberty in courts in Britain, Europe and the Commonwealth. 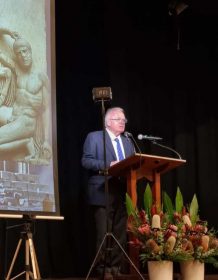 “At the end of the day, the British will accept a court judgement which tells the truth, which the British museum has tried so long to cover up. That the marbles were stolen, that they belong in Athens, so that the world can see not just the glory of Greece but the glorious beginning of democracy,” Robertson concluded.

“He was a constant source of guidance and support for me, as Chairman of the Australian organisation, and about 20 years ago I went to visit him… I remember he said to me, ‘Comrade, when next you’re in London, talk to Geoffrey’. And I did and I’m glad I did,” Hill said.