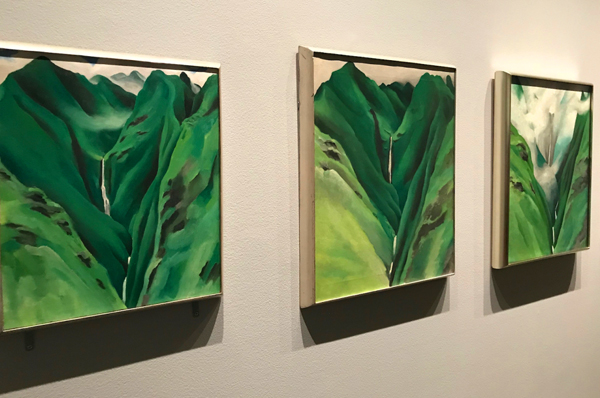 Angelica Frey, Georgia O’Keeffe’s Visions of Hawai’i Blossom in the Bronx, 30 May 2018

The New York Botanical Garden has planted a “Hawai’ian Paradise Garden” as part of an exhibition chronicling O’Keeffe’s 1939 trip to Hawai’i to make art for a pineapple company’s advertising campaign. 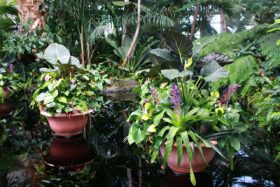 Detail of the “Hawai’ian Paradise Garden” in the Enid A. Haupt Conservatory at the New York Botanical Garden (all photos by the author for Hyperallergic).

In 1939, the advertising agency N.W. Ayer & Son invited Georgia O’Keeffe on a trip to Hawai’i. The modernist American artist was to paint original art for the advertising campaign for the Hawaiian Pineapple Company. As part of the deal she struck with the agency, O’Keeffe could produce as much art as she wanted, provided she would eventually deliver two “on brand” artworks. And while the imagery of Hawai’i that was sold to her was in line with the dominant clichés — palm trees, beaches, and local dancers swaying to and fro — she quickly outgrew the touristy side of the islands and spent nine weeks roaming the territory, producing artworks that ranged from close-ups of flowers to dramatic landscapes.

The new summer show at New York Botanical Garden, Georgia O’Keeffe: Visions of Hawai’i, consists of a selection of paintings (17 out of the 20 she produced) and the recreation, within the Enid A. Haupt Conservatory, of a typical Hawaiian “paradise” (a mixture of native flora and plants that were brought to the islands over the centuries). Visions of Hawai’i highlights the way nature informed O’Keeffe’s artistic production while she was in Hawai’i. Her advertising work — the original impetus for the trip — is only a minimal part of the exhibition and consists of two paintings. O’Keeffe initially presented the N.W. Ayer & Son with a painting of Heliconia (or crab’s claw ginger) and one of a Papaya tree. The agency rejected the latter, as it unwittingly turned out to be the signature fruit of the client’s competitors. She subsequently completed another painting, the more on-brand “Pineapple Bud,” which she allegedly worked on only upon her return to New York.

An avid explorer, after the obligatory tour of popular destinations, O’Keeffe soon set out to explore the outdoors, taking note of the color and texture of the flora she encountered. “Queer, very much wrinkled strange colored green mountains,” was one way she described the landscape in a letter (dated February 9) to her husband Alfred Stieglitz. The same letter also contains a description of a flower that was “so pretty it almost seems impossible that it is real.” However, if you were to walk into the conservatory and expect a visual feast such as last year’s Dale Chihuly installations, you might be disappointed: the “Hawai’ian Paradise Garden” NYBG recreated is more green and imposing  than colorful and pretty, since the flowers on display are diminutive in size compared to the lush plants. But this does not take away from the richness of the exhibition.

Even though she did produced a relatively small body of work during those nine weeks, O’Keeffe’s trip to Hawai’i proved to have a palpable impact on her career. Not only did she, for the first time, find a sense of place in an environment that was not familiar to her (as opposed to New York City, New Mexico, and Lake George), but, in the Hawai’i paintings she also started developing visual forms and devices that would become fixtures of her subsequent paintings: think of vortex-like motifs, oculi, and visions of the great beyond.