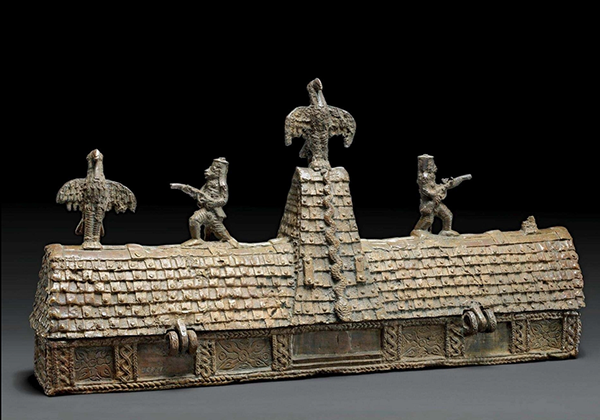 Container in the shape of a building from the Palace of Benin (17th-18th century)Photo: © Martin Franken/Ethnologisches Museum, Staatliche Museen zu Berlin

So far 25 institutions have contributed 8,000 entries; the plan is to expand it and translate it into several languages

The German Digital Library has launched an online searchable portal listing objects in public collections acquired in the colonial era that so far comprises 8,000 contributions from 25 institutions.

The library plans to expand the inventory into a comprehensive, central platform in several languages. The items listed so far include both artefacts and specimens from natural history collections. Human remains are also included in the inventory—for ethical reasons, without pictures.

“Maximum transparency is an important yardstick of a responsible approach towards collections from a colonial context in our museums and institutions,” Culture Minister Monika Grütters said in a statement. The construction of the portal was funded by the federal government.

The culture ministers of Germany’s 16 states agreed in March 2019 to create conditions for the repatriation of artefacts in public collections that were taken “in ways that are legally or morally unjustifiable today” from former colonies, describing their return as “an ethical and moral duty.”

The database is accessible here.