You are here: Home » Articles filed under: 'News' » Article: 'Getty down from the hill'

Getty down from the hill 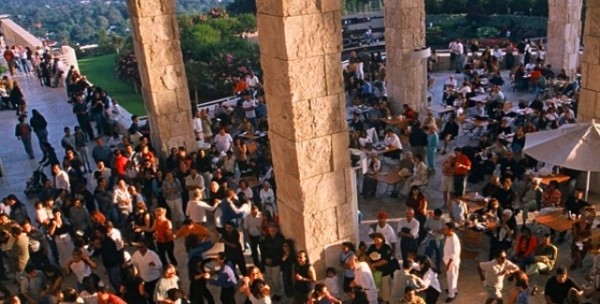 Justinian Jampol, How the Getty came down from the hill and made Angelenos love it, The Art Newspaper, 23 August 2015

When the Getty Center opened in 1997, reviews of the $1bn project, designed by Richard Meier, had a common refrain: the giant complex, perched high above the 405 freeway and requiring a tram to deliver art pilgrims to the new mecca, was aloof from the community it had been built to serve. Martin Filler in the New York Review of Books dubbed it “the Big Rock Candy Mountain”, referring ironically to its almost mystical and dreamlike promise. Using the language of utopia, CNN called it a “grand temple on a hilltop”—the salvation of a culturally backward people, some seemed to think.

Bedtime stories about Frank Gehry’s Guggenheim and the “Bilbao effect”—civic transformation brought about by the construction of a wildly popular building—increased pressure to create an international landmark. But like many dreams of cultural institution-building, the reality was complicated, and the Getty has had a particularly strenuous uphill battle…

Now, nearly 20 years after its opening, the Getty is experiencing a renaissance under Cuno, who took over in 2011 after the sudden death of his predecessor, James Wood. Leveraging its enormous capacity and resources, and world-famous expertise, the Getty is realising its early promise of becoming an apostle for culture in the City of Angels.