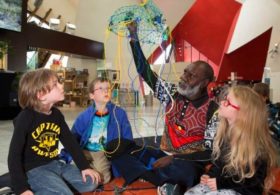 A senior Indigenous artist has travelled more than 2,300 kilometres from Cape York to Canberra to share the story of his people’s ghost net art — sculptures woven from abandoned, lost or discarded fishing nets.

Sid Bruce Short Joe is from Pormpuraaw, a remote community of around 700 people between Karumba and Weipa on the peninsula’s west coast.

Mr Short Joe was invited to Canberra for NAIDOC Week by the National Museum of Australia (NMA), where he was artist-in-residence for a day, and the Department of Foreign Affairs and Trade (DFAT).

DFAT mounted an exhibition of ghost net sculptures in the foyer of its headquarters, the RG Casey building.

Abandoned fishing nets pose a major threat to marine life in the Gulf of Carpentaria due to trapping endangered animals such as sawfish, dugongs and sea turtles.

Indigenous rangers collect the nets when they wash ashore in the monsoon season and deliver them to the Pormpuraaw Art and Culture Centre.

The artists untangle and clean the nets, sometimes removing the remains of dead animals.

The nets are then transformed by artists into starfish, jellyfish, sharks, barramundi, crocodiles and other sea and coastal creatures. 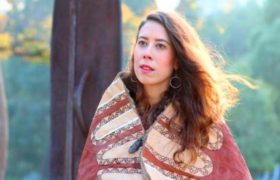 A find in Melbourne Museum 17 years ago has led to the revival of the sacred cultural practice of possum cloak making in Victorian Aboriginal communities.

In 1999 two precious possum cloaks were uncovered in a private cabinet in the museum’s basement.

The cloaks, collected from Echuca and Lake Condah communities in the 1800s, were two of seven remaining cloaks worldwide that were taken from Indigenous communities during colonisation — the remaining five were held in international museums.

Artist Lee Darroch was among 13 people who watched that day.

“The young curator pulled the Lake Condah cloak out of the box and there it was just in front of us on the table,” Ms Darroch said.

“Everyone felt the makers in the room with us really powerfully and strongly, and that was where it all started.”

Ms Darroch and artist Vicki Couzens decided then and there to learn how to make possum cloaks, recreate them, then teach their skills to every community that once had a cloak-making tradition.

Seven years later they had worked with 36 communities in Victoria to revive possum cloak making and each group was represented at the 2006 Commonwealth Games opening ceremony, wearing their possum cloaks.

“It’s really common for people the first time they wear one to cry or feel overwhelmed by their ancestors being with them.”