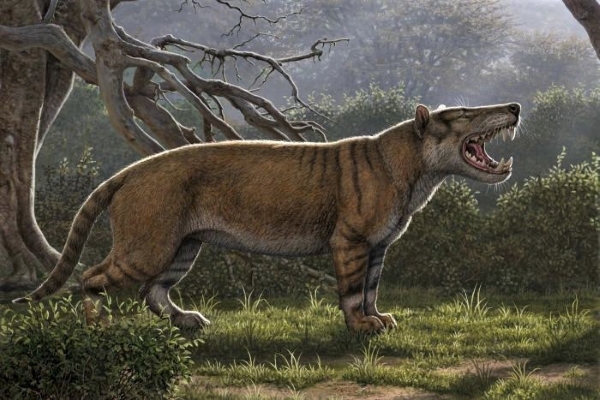 Simbakubwa’s skull is believed to have been as large as a rhinoceros skull. (Supplied: Mauricio Anton).

Of all the places you could imagine discovering a giant meat-eating mammal, a drawer is probably not one.

Matthew Borths was studying fossils at the Nairobi National Museum in Kenya when he decided to have a poke around.

“On a lunch break I decided to pull open some different drawers just to kind of see what else was there,” Dr Borths said.

“And one of the drawers I pulled out had this gigantic fossil in it.”

Luckily for Dr Borths — and the world of palaeontology — his area of expertise just so happened to be an order of extinct meat-eating mammals called the hyaenodonta.

While he immediately recognised the lower jaw bone as a hyaenodont, he knew it was from a species that had not been described before.

“I was like, ‘how did I not know this was here?’ I felt really responsible,” he said.

“I’m one of the few people on the planet that really cares about this group of animals.”

Knowing he was onto something special, he contacted his research adviser who put him in touch with a colleague at Ohio University, Nancy Stevens, who had also done some palaeontology work in Kenya.

“When I contacted her, I discovered that yeah, she’d been in Nairobi about three years earlier than I had, and she’d had the exact same experience,” Dr Borths said.

“She’d opened this drawer and was like, ‘What is this? This is amazing!’

“She’s also interested in all kinds of mammals … but doesn’t have as much insider knowledge of the carnivore evolution. That’s kind of my little niche.”

Together, they identified the species and figured out where it sat in the hyaenodonta order. They’ve published their findings on Thursday in the Journal of Vertebrate Palaeontology.

After six years, they concluded that the animal was the biggest meat-eating beast in Africa of its time, between about 23 and 20 million years ago.

A mammal with a head about the size of a rhino’s and weighing in at around 1,500 kilograms, they called their discovery Simbakubwa kutokaafrika.

While “Simbakubwa” is a Swahili word meaning “big lion”, the hyaenodonts aren’t related to any modern-day African mammals.

How did a giant carnivore fly under the radar for so long? 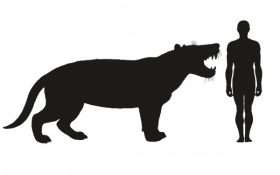 Simbakubwa is Swahili for ‘big lion’, but it’s not closely related to any animals living in Africa today. (Supplied: Mauricio Anton).

The fossils were found decades before by a group of researchers on the hunt for ancient ape remains at a western Kenyan dig site called Meswa Bridge.

The palaeoanthropologists who found it were experts in apes, not quadripedal carnivores, and so put it away in a museum drawer for someone else to get to.

In their research into the Simbakubwa, Dr Borths and Dr Stevens discovered that plenty of other researchers had also opened the drawer before them.

But while they all expressed astonishment at what lay inside, they had other projects to get to and didn’t possess the particular knowledge needed to recognise the find.

This highlights not only how niche a field of expertise can be in palaeontology, but the importance of museums.

Around the world, it’s likely that there are millions of undescribed species sitting in collections awaiting classification.

In Australia, we name around 2,500 new species each year, according to Museums Victoria senior curator Kevin Rowe.

“We’ve described about 30 percent of species in Australia,” Dr Rowe said.
“That’s around 192,000 species, but we estimate there’s another 420,000 awaiting description.”

Many of those are sitting in drawers of their own.

But at the current rate, it will take around 400 years to classify all of Australia’s species, by which time many will be extinct.

In 2018, the Australian Academy of Science launched the Decadal Plan, which detailed a roadmap to radically boost the rate of taxonomic research in Australia.

The plan was endorsed by Sir David Attenborough, who said at the time that palaeontology around the world was being stripped of funding at a time when species are under the greatest threat.

“This has serious consequences for the future of life on Earth,” he said.

While serendipity led to the discovery of Simbakubwa, we may end up losing many species before we even know they exist, Dr Rowe said.

“It’s increasingly difficult because funding for taxonomy is getting harder and harder to get,” he said.

“If you lose museums, you lose the ability to name and define species, [but] it’s about getting the time and people to do that.”