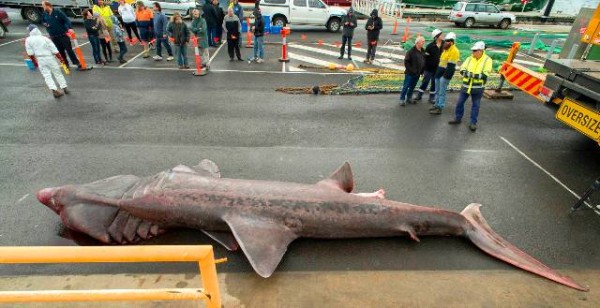 A seldom-seen ocean giant, a 6.3 metre Basking Shark, has been caught off the west coast of Victoria, providing Museum Victoria scientists rare insights into these shark’s hidden lives.

As the second biggest fish species on the planet (after the Whale Shark), there is very little known about basking sharks. They are slow-moving gentle plankton feeders who use their huge mouth to trap tiny plankton and jellyfish. They grow to 12 metres long but are very un-shark like in that they have thin weak jaws lined with tiny (2 mm long) teeth.

The species is better known from the northern hemisphere, with southern populations being rarely seen and even rarer in museum collections. Museum Victoria has only encountered three animals in more than 160 years of documenting Victoria’s wildlife. Most are represented by just tiny teeth and skin samples.

The current shark was accidentally caught by a fishing trawler in western Bass Strait and was returned to Portland for scientific research. With modern techniques, much can be learned from this single unfortunate capture.

Museum Victoria’s Senior Curator of Ichthyology, Dr Martin Gomon, stated that “these rare encounters can provide many of the missing pieces of knowledge that help broader conservation and biological research”.

Tissue samples, stomach contents and vertebrae have been taken that allow Museum Victoria fish experts and research collaborators to do the genetics on relationships to the northern hemisphere populations, ageing studies, dietary studies and isotope analysis from muscle and cartilage (to seek insights into the life history of this individual shark). Requests for samples, images and data from are already flooding in from scientists around Australia and the world.

Di Bray, Senior Collection Manager of Vertebrate Zoology also stated that “These animals have been sighted live over the years in Victoria, including one recently being filmed feeding in Western Port Bay. As they do not need to breathe air like whales and dolphins, they are not so commonly seen at the surface. We have no idea of what their numbers may be”.

Museum Victoria scientists and preparators travelled to Portland to measure, describe and take samples from the shark. The head and fins have also been taken to build a full-scale exhibition model of the shark. The museum is very grateful to the skipper and crew of the Castella Rosa for offering the shark to the museum to gain critical insights into this little-known species.

Globally, basking sharks are listed as being vulnerable, only recently being protected from fishing pressures, particularly for the shark fin trade. Illegal hunting and trade still continues.

For more information, go to: www.fishesofaustralia.net.au/home/species/1847