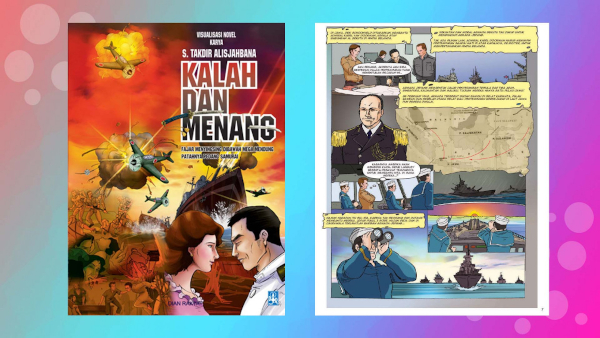 Comic refresher: The Indonesian classic ‘Kalah dan Menang’ (Defeat and Victory) by Sutan Takdir Alisjahbana has been adapted into a comic book, giving it new life for a new generation of readers. (Courtesy of Gramedia/-).

With the advancement of digital technology, brick-and-mortar cultural institutions around the world are increasingly expanding to the digital domain, offering users greater access and exposure to their wealth of information.

But this is not yet the case for many cultural institutions in Indonesia.

In preparing for the planned November 2020 launch of the “Retas Budaya” (culture hack) program on the creative, collaborative use of open cultural data, Goethe-Institut Indonesien and publisher Elex Media Komputindo held an online seminar on July 17 to push for Indonesian institutions to start opening their collections to public consumption.

The “From Curation to Creation” seminar discussed the ways in which the materials at GLAM (galleries, libraries, archives, museums) institutions can be adapted as both fictional and nonfictional digital content.

Elex Media nonfiction editor Paulus Eko Nugroho pointed out the role of writers as conveyors and curators of factual information through a variety of media.

“Authors have quite a noble task. Noble, in the sense that we try to connect galleries, libraries, archives and museums with the public in a creative, pleasing way, through several different types of writing,” Paulus said.

He highlighted the new forms of media developing from the concept of digital affordances and emerging mediums of digital consumption, such as independent authors using social media and blogs to publish their work. Meanwhile, interactive platforms like games apps and virtual tours offered wider possibilities for interaction.

“Our role as writers is that we write the game flow, the storyline, based on the data we have. Our skill is in processing this information into all these formats,” Paulus said.

He said the key to generating greater recognition for GLAM institutions and culture was collaboration between writers and creatives from other fields, a product of the sharing economy in which information and skills were exchanged across communities.

As for curating nonfiction work, Paulus said that curiosity and interest, foresight, knowledge and the ability to process information were among the key skills. He added that a keen eye was needed in selecting historical events and subjects that would pique the interest of the average reader.

As nonfiction was based in reality and fact, he emphasized the importance of grounding the work in clear and accurate settings that were then “seasoned” and made digestible for the reader, a process he called “condiments”. 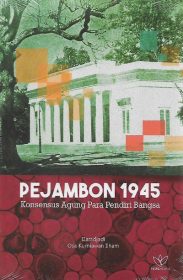 Inner workings: The state ideology of Pancasila is given a fresh angle in ‘Pejambon 1945’, which compiles notes from discussions that were held during its inception. (Courtesy of Puspawedha/-)

Paulus pointed to the Google Arts and Culture application as an example of a digitalized gallery. Meanwhile, the comic adaptation of the Indonesian classic Kalah dan Menang (Defeat and Victory) by Sutan Takdir Alisjahbana was an example of refreshing the format, the dramatized collection of notes from the 1945 meetings that gave birth to the state ideology Pancasila was a way of repackaging historical archives, and visual reference books were a new medium for showcasing museum artifacts.

In contrast, Elex Media fiction editor Denin Rahman pondered his use of perspective in writing and editing.

The storyline was the focal point of a fictional work. Whether it was based around a historic object, such as Leonardo da Vinci’s paintings in Dan Brown’s The Da Vinci Code, or a particular setting in a historical period, as in F. Scott Fitzgerald’s The Great Gatsby, writers must find their personal angle in bringing new life to history.

Going beyond historical fact, fiction aimed to rewrite or reframe history in order to entertain.

“Fiction can be more expansive, more limitless. [For example,] Dan Brown provides his own interpretation of a painting,” Denin said. 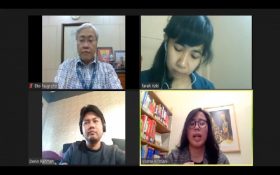 Repackaging history and GLAM content is exactly what the Retas Budaya program is about.

In its bid to bridge the information gap between Indonesia’s GLAM institutions and the public while advancing knowledge, the program calls on creatives and institutions to collaborate on enriching and transforming cultural data through stories, games and artistic expression.

Retas Budaya project coordinator Ivonne Kristiani explained that the program’s main aim was to push GLAM institutions to open their cultural data for public consumption, as in the global movement and network imitated by OpenGLAM.

A step beyond free access, OpenGLAM allows the public to not just enjoy cultural data, but also to use it in their own creative projects.

“We’re urging this so that creatives, artists, writers and musicians can use the data. So not only is it viewed and accessed, but […] the GLAM side and the creatives’ side can enrich the data with their own interpretations and creativity,” said Ivonne.

Opening access democratizes information and strives to remove the exclusivity that used to be associated with GLAM institutions, offering a wealth of information to all those interested in history and culture.

“In the past, collections could only be seen, visited and experienced when people visited [GLAM] institutions. But with the progress in digital technology and internet access, we are pushing for data, primarily public domain and publicly funded data, to be opened, enjoyed and accessed by the public,” she added.

Ivonne said that Indonesian students and researchers alike faced roadblocks in sourcing materials for their studies, and that this could compromise their final products.

“Often, when we want to obtain cultural data about Indonesia, we have to ask Leiden [University] or the Tropenmuseum. These are Dutch institutions and their perspective differs from the data we collect and possess,” she said. (ste)

— The writer is an intern at The Jakarta Post.