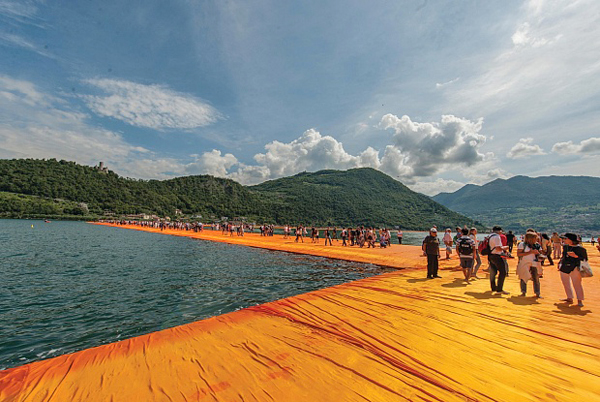 Christo’s triumph in Italy, a ravenous appetite for French art abroad and a shake-up in New York are the big stories of The Art Newspaper’s 2016 attendance survey.

Christo’s Floating Piers (2016) on Lake Iseo—the New York-based artist’s first outdoor installation since 2005—was the world’s most-visited work of art last year. Christo erected 3km of fabric-covered pontoons between an island and the shore and invited the public to walk on water. In total, 1.2 million people experienced the site-specific installation over 16 days last summer (an average of around 75,000 a day).

French museums were responsible for many of the more conventional blockbusters last year. They sent shows around the world that enticed huge audiences. An exhibition of Post-Impressionist works from the Musée d’Orsay’s collection, organised in partnership with Spain’s Fundación Mapfre, drew big crowds to Rio de Janeiro’s blockbuster mill, the Centro Cultural Banco do Brasil (CCBB) (9,700 visitors a day). Another 100 works by Renoir, mostly from the D’Orsay’s collection, attracted around 6,600 visitors each day to the National Art Center in Tokyo. Meanwhile, around 4,100 daily visitors went to see a show of works by Monet drawn from various Paris collections at the Hong Kong Museum of History. 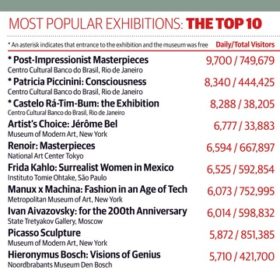 Step aside, MoMA and Met

The Whitney Museum of American Art, which moved to its new Renzo Piano-designed home in downtown Manhattan in 2015, has put an end to the city’s traditional duopoly of the Museum of Modern Art (MoMA) and the Metropolitan Museum of Art. The Whitney hosted five of the ten most-attended exhibitions in New York in 2016. Its strong programme, prime location and sweeping city views drew crowds to a series of solo shows titled Open Plan on its cavernous fifth floor. The experimental, five-part exhibition turned over the largest column-free museum space in New York to five artists, including Steve McQueen, Lucy Dodd and Michael Heizer, for several weeks at a time. On average, more than 4,000 visitors saw each of the five presentations, roughly equivalent to the number that visited the museum’s Frank Stella retrospective.

Despite the Whitney’s rapid rise, MoMA and the Met continue to lead the league in New York. MoMA remains at the top, thanks to staffers who performed each afternoon over a long weekend last October in a production directed by the French choreographer Jérôme Bel. The event drew an audience of around 6,800 people a day, boosted in part by its central location in the museum’s atrium. Meanwhile, in MoMA’s galleries, a more traditional show, Picasso Sculpture, co-organised with the Musée Picasso in Paris, attracted around 5,900 visitors a day.

The Costume Institute at the Met staged, by its own recent standards, a stripped-back presentation of haute couture meets high-tech with the exhibition Manus x Machina: Fashion in an Age of Technology, which drew around 6,100 visitors a day. (In 2015, around 6,600 visitors a day visited the institute’s theatrical exhibition, China: Through the Looking Glass.)

A heavy French accent in London

Impressionism remains a reliable crowd-pleaser. An exhibition with a heavy French accent—Painting the Modern Garden: Monet to Matisse—was the most-attended paying exhibition in London. It attracted around 5,100 visitors a day to the Royal Academy of Arts, which makes it the UK institution’s fourth most popular show since we began our survey nearly two decades ago. (The art may have mainly come from France, but the show came from the US; it was co-organised by the Cleveland Museum of Art.)

It was a quiet year for other major London institutions. Shows at the Victoria and Albert Museum, the British Museum and the National Gallery did not match figures in previous years, but Georgia O’Keeffe at Tate Modern attracted just short of 3,000 visitors a day.

Female artists feature prominently in our survey. At the Guggenheim Bilbao, Louise Bourgeois’s Cells attracted around 4,600 visitors a day. The Japanese artist Yayoi Kusama, who in 2014 proved a phenomenon in South America and Asia, continued to pull in the crowds—this time in Scandinavia. A show that included her psychedelic clothing drew 3,000 visitors a day on average to the Louisiana Museum of Modern Art in Humlebaek, Denmark, and the Moderna Museet in Stockholm. And in Brazil, a show headlined by Frida Kahlo drew twice that daily figure to São Paulo’s Instituto Tomie Ohtake.