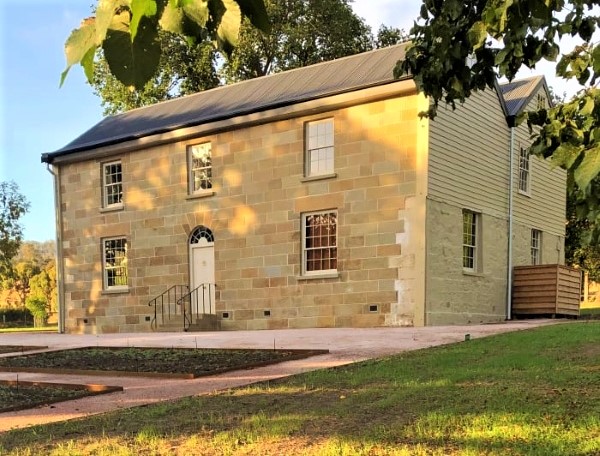 Formerly a ruin, 19th-century Patterdale has been restored with the help of a much-loved painting by the colonial landscape artist.

You can picture John Glover in radiant sunlight, lying back on a chaise longue. Draped in a possum skin rug to ward off the Tasmanian chill, he wears a satisfied look as he puts the finishing touches to the day’s painting: a vaporous dawn over Patterdale Farm in the foothills of snow-capped Ben Lomond in north-eastern Tasmania.

Three years ago the current owners of the farmhouse, Carol and Rodney Westmore, set themselves the challenge of restoring Patterdale, named by the painter after the English village he once called home.

“I saw a crack opening up along the west-facing wall and knew I did not want to be responsible for losing John Glover’s house,” says Carol.

The house, with four upstairs bedrooms and en suites, is open on request as a luxury bed & breakfast, for artists’ residencies, and by appointment for private groups.

Also now open once a month to the public are seven self-guided walks to the spots where Glover (1767-1849), one of Australia’s foremost colonial landscape artists, set up his easel – a concept devised by the former long-term Glover Prize curator Jane Deeth.

The walks at Patterdale were officially launched during this year’s Glover Prize, staged in nearby Evandale in March and won this year by Melbourne-based Piers Greville for his work Pedder Prime Cuts.

After speaking at the launch, the director of the Tasmanian Museum and Art Gallery, Janet Carding, walked through a sheep paddock to the spot where Glover painted My Harvest Home (1835), which hangs in the gallery.

“What a gift Carol and Rodney Westmore are making to the community,” Carding told guests including Greville, prize judge and artist Joan Ross and curator Ron Radford, former director of the National Gallery of Australia and the Art Gallery of South Australia.

Glover lived in the 1831 farmhouse, in Deddington, in the foothills of the Ben Lomond, for the last 18 years of his life with his wife, Sarah, and eldest (and illegitimate) son – the farmer and artist John Richardson Glover. All three are buried in the nearby community chapel, of which both father and son were trustees.

Glover moved to Van Diemen’s Land at the advanced aged of 64, leaving two married daughters behind to follow his three sons, who had arrived as free settlers two years before.

Popular in Regency England, he was a member of the English school of painters that included Constable and Turner, and had been honoured with a gold medal from the King of France. One of his Tasmanian paintings hangs in the Louvre in Paris.

The Westmore family, originally from Melbourne, have farmed in Tasmania for more than 40 years and have owned the Patterdale merino property for more than a decade.

The 4500-hectare farm (4000 hectares are heritage listed) has operated continuously since the 1830s, producing some of the best superfine merino wool in Australia. The nearby landscape, with its white gums, kangaroo grass, and poa hillsides, was dubbed Glover Country by the Australian Impressionist artist Tom Roberts (1856-1931).

The farmhouse, however, had been left to ruin, a shelter only for possums and rodents – until the painstaking restoration, masterminded by Launceston-based father and son builders Anstie Constructions. Tasmanian plasterers, stonemasons, carpenters and shingle splitters with traditional skills were employed to return the house to historical authenticity.

One original cedar shutter in the parlour proved the model to reconstruct the others. Upstairs, original Tasmanian oak floorboards are anything but level, offering the character of a place well loved and lived in rather than well built. Wallpaper remnants are framed like paintings, and original paint colours matched as closely as possible.