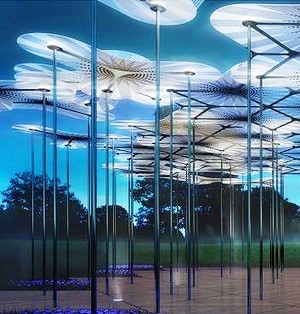 The golden rule of success for the head of a cultural institution is simple, according to the director of Britain’s Victoria and Albert Museum, Martin Roth.

Fresh from a twice-yearly talkfest of museum directors, he says: “The amount of construction sites, I mean the amount of projects.

“Obviously, you’re not a good museum director if you don’t build.”

Roth satisfies that criteria with his multi-million pound Exhibition Road project that will give the V&A’s flagship London building in South Kensington a new entrance, underground gallery and courtyard.

He says the renovation adds new spirit to the venerable institution founded in 1852.

“That’s what I like with your MPavilion idea is that it always adds new ideas,” he says of Melbourne’s pop-up architectural commission initiated by businesswoman and arts patron Naomi Milgrom. (The inaugural MPavilion in 2014 was designed by Australian architect Sean Godsell). “Whatever the V&A did for 50 years, we didn’t try to copy the past. We always try to add something new.”

The temporary structure designed to create the sensation of a forest canopy will be unveiled by Roth in Melbourne’s Queen Victoria Gardens on Monday.

Roth is full of praise for the architect whose work “combines elegance and style and new technologies,” he says. “It’s also for Amanda it’s why I travel all that way to come and see the pavilion.”

He says the MPavilion acts as an incubator of new ideas.

“A temporary commission gives a lot of opportunities to show different architects from different parts of the world using new material,” he says. “It’s more like an idea instead of always setting everything in stone and making for eternity.”

Roth will discuss building new cultural spaces with Levete and Milgrom on October 6.

Roth has built the V&A’s profile in Australia through the export of major shows, including David Bowie Is… at the Australian Centre for the Moving Image, the Undressed exhibition at the Powerhouse Museum, Queensland Museum and Bendigo Art Gallery and Inspiration by Design at the State Libraries of Victoria and NSW.