December 10th, 2020 | Browse other: News. | Tagged with: fear of erasure of the millennia-old Armenian monuments, Google Arts & Culture as an Agent of Ethnic Cleansing | 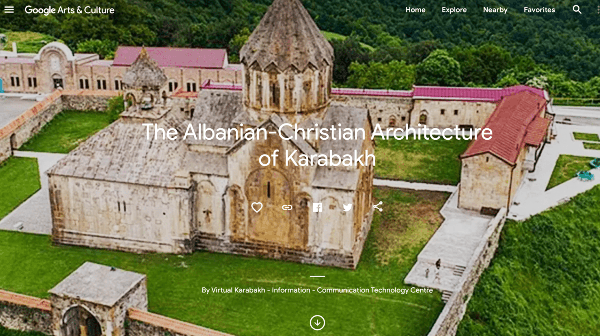 A contextual screenshot of the opening page of Google Arts & Culture’s “The Albanian-Christian Architecture of Karabakh” featuring Gandzasar monastery. (screenshot by the author for Hyperallergic).

After Azerbaijan declared victory following six weeks of brutal conflict, the state has gained control of the Armenian-governed area of Artsakh, increasing fear of erasure of the millennia-old Armenian monuments in the area.

Editor’s note 11/16/2020 11:53 EST [UPDATE]: Since the publication of this article, the original page for “The Albanian-Christian Architecture of Karabakh” on Google Arts & Culture is no longer accessible. Initially, individual pages were still available on mobile and elsewhere, but have since been made inaccessible.

On November 10, while the world was focused on the US elections and COVID-19 miseries, the state of Azerbaijan declared victory in the first full-scale, state-on-state war in the modern era. This six-week, brutal conflict will give Azerbaijan control over most of the Armenian-governed area of Nagorno Karabakh, known to Armenians as Artsakh.

In addition to the anticipated removal of ethnic Armenians when the final batch of territories are handed over by December 1, there is a growing fear of erasure of the millennia-old Armenian monuments in the area.

There is a reason for this fear; as reported in Hyperallergic, Azerbaijan has destroyed 89 Armenian churches, 5,840 intricately carved cross-stones called khachkars, and 22,000 tombstones in one of its territories, Nakhichevan, from 1997 to 2006. These irreplaceable monuments were dated from as far back as the early Christian period, and perhaps before.

David Zakarian, faculty of Oriental Studies at the University of Oxford, explained in an email that there are thousands of unprotected and inadequately documented ancient Armenian monuments in the recently conquered territory of Nagorno Karabakh. These include khachkars, monasteries, and churches that have been in use longer than almost any religious buildings in the world.

The Google Arts & Culture site is currently providing support for this cultural erasure. The site hosts a fictitious history of the region written by the authoritarian Azerbaijani regime, which invites the destruction of any monuments that do not conform to state ideology.

The Azerbaijani government has embraced a national identity that states that Azeris are the region’s original inhabitants, despite the lack of any non-Azerbaijani academic support for this claim. Echoing the Turkish “Language of the Sun” theory that every language on Earth is descended from Turkish, Azerbaijan claims that they are descended from a Caucasian Albanian race who predates all people, including Armenians, in the region by 500 to 3,000 years.

Thomas de Waal, an expert on the Caucusus who has published several books on the region that often do not please Armenians or Azerbaijanis, wrote as a summation of this theory, “Nobody believes the Caucasian Albanian theory outside [of] Azerbaijan.”

In an email, Igor Dorfmann-Lazarev, lecturer at the Aix-Marseille Université, elaborated on why Azerbaijan has falsified the history of the Caucusus and why this inaccuracy is causing destruction. He said:

[…] looking how Armenia and Georgia have been competing for their ancient past, Azerbaijan, which is a new polity, also wanted to get one [an ancient history]. […] It is under these conditions that the myth about Caucasian Albania as the direct ancestor of the Turkic-speaking Azerbaijan appeared and was propelled […] one has to prove that the Albanian past of Azerbaijan has no Armenian traces on it…

That is, with Soviet encouragement, Azerbaijan invented a history of themselves in the ancient past. This falsified history has driven state policy to make this deceptive account real by literally destroying evidence that indicates otherwise.

Ominously, Azerbaijan also declared the monuments in Nakhichevan as Caucasian Albanian before destroying them.

Screenshot of Google Arts & Culture’s virtual Karabakh page featuring art that depicts the 1990s Nagorno Karabakh war (see the boots and gun). The message is that Armenians have trampled and destroyed the culture of the area. (screenshot by the author for Hyperallergic).

The only significant support of this destructive mythology outside of Azerbaijan is found on Google Arts & Culture’s site, on its “Virtual Karabakh” page. This resource was made by “The Virtual Karabakh’ Information – Communication Technology Centre … by decree of President Ilham Aliyev of the Republic of Azerbaijan.” On it, one finds page after page of artifacts from Nagorno Karabakh, which are a strange mishmash of sentimentality (“The woman is a symbol of beauty, elegance and innocence. The woman in this painting represent loyalty. They remember loved ones lost at the frontline [e.g. killed by Armenians]”). This schmaltz is accompanied by a painting of presumably Armenian soldiers smashing Azeri cultural artifacts, and innocuous pictures of Azeri costumes and rugs from the 19th century. However, propaganda about the Caucasian Albanian heritage of the region constitutes the bulk of the site. Most of these are in the section titled “The Albanian-Christian Architecture of Karabakh,” which, in picture after picture of Armenian monasteries, churches, and other ruins, the site expounds how they are absolutely not Armenian. There have been no Armenians in the area, according to this site, except as recent aggressors. It should be mentioned that Caucasian Albanians have no connection to current day Albania.

Countries all have their own national fantasies, but history has shown repeatedly that a national mythology of victimhood at the hands of a minority is a bloody one. Google Arts & Culture’s implicit endorsement of this counterfactual history gives significant support to the process of ethnic cleansing.

Before taking possession of the historical sites in Nagorno Karabakh, Azerbaijanis had posted on social media that they would decide what element of monuments to destroy and preserve, based on their idea of history.

Jasur Abdullayev tweeted,  “Rest assured Azerbaijan will keep them [monuments] safe and clean […] We will inspect antique stones apart from Chirches [sic] and expertise whether they are really antique or forgery made after 1992.” 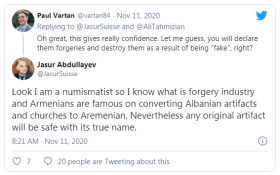 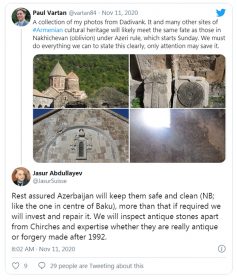 Simon Maghakyan, researcher and cultural rights defender, believes that the destruction will happen gradually in Nagorno Karabakh. He feels that Azerbaijan will renovate the recently bombarded Armenian cathedral in Shushi built in the 19th century and present it as a beacon of Azerbaijani tolerance, as this does not interfere with the national mythology that falsely claims Armenians settled in the regions in roughly the 19th century. In fact, the ancient historian Strabo affirms the presence of Armenian-speaking peoples in Nagorno Karabakh in the second century BCE. He also thinks that well-known buildings will be preserved for now, under the fiction of Caucasian Albania. With the thousands of Armenian inscriptions on these buildings dating back millennia being immediately removed. Lesser known sites face destruction as will the better-known ones eventually as happened in Nakhichevan.

Seconding this opinion is Igor Dorfmann-Lazarev, who believes that this is already happening. He explained in an email:

My colleagues…tell me that as soon as the Armenian identity of a writing on a church or on a stone is ascertained, it is eliminated. The underlying ambition is to fabricate an Albanian past of Azerbaijan, while eliminating from it everything Armenian. This will match the Azeri version of the history of the region: Caucasian Albania with no links to Armenia. In other words, an Armenian church without the Armenian inscriptions, crosses or symbols is a kind of monuments suiting the Azeris in their claim of Caucasian Albanian ancestor. When Aliev [the dictator of Azerbaijan] and his people declare of their intention to preserve historical monuments, they mean precisely this. 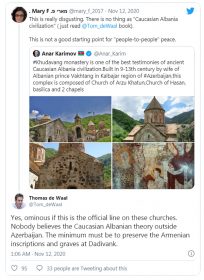 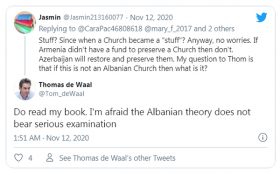 Google Arts & Culture’s mission statement is “…to preserve and bring the world’s art and culture online so it’s accessible to anyone, anywhere” However, this site is promoting state propaganda that aids in irreparable loss to the world’s heritage. It is true that even if Google Arts & Culture pulled the website down tomorrow, it will not slow the destruction. Art historians, archaeologists, and activists know that the only thing that can impede complete erasure of thousands of years of history is attention from the world, and they believe not allowing Azerbaijan to use Google to bolster its claims is a first step. They have been encouraging people to register a complaint with Google Arts & Culture regarding hosting a site that encourages hate and destruction through their feedback.