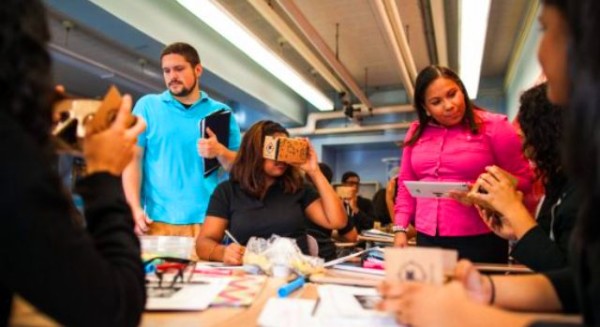 Students try out Google Expedition, which will be available for Toronto students to try in January. Source: The Star.

Local students first in Canada to use Google Expeditions, a program that allows them to take virtual field trips to Mars or the Acropolis.

Toronto students will soon be able to walk along the Great Wall of China or snorkel in the Great Barrier Reef from their classrooms with the Google Expeditions virtual reality field trip experience.

Local teachers will be the first in Canada to have the opportunity to sign up for the Google Expeditions Pioneer Program in January. Schools that have six or more interested teachers will get one day to try out the virtual teaching tool.

“One of the key things we’ve heard from teachers is they really wanted to find a way to engage their students meaningfully and find that hook to inspire and get kids excited about learning,” said Jennifer Holland, program manager for education apps at Google.

The company will deliver kits containing smartphones, a tablet for the teacher, a router that allows the software to run without an Internet connection and either a View-Master or Google Cardboard.

Google’s cardboard viewing boxes, which start around $20 (U.S.), wrap around a smartphone that is held up to the face to create an immersive experience.

Google Expeditions integrates Cardboard with images from Google Earth and Street View, as well as 360 degree footage captured on its Jump cameras.

The tech giant is gathering feedback from students and teachers during this stage of the project before a planned release of an Expedition app that will be available on devices schools have already purchased later in the school year, said Jennifer Holland, program manager for education apps at Google.

The Expedition library currently includes more than 120 virtual trips to sites including Antarctica, the Acropolis, Chichen Itza, Mars and the Borneo rainforest.

They are annotated with points of interest, ambient sound and other cues for teachers to integrate into their lessons, whether they’re teaching 4th grade math or 12th grade history.

“These teachers can bring abstract concepts to life,” Holland said. Imagine learning math by calculating the number of bricks it took to build the Great Wall of China,”

The tools could help make hands-on learning more accessible, said Brandon Zoras, a high-school science teacher at Monarch Park Collegiate. He plans to bring it in during his grade nine ecology or space units.

The technology “enables inclusivity,” he said, as it will allow many students to participate who otherwise could not share the field trip experience in real life due to financial or physical barriers.

“For them to be able to go around and manipulate and explore, I think that’s the next step into bringing learning a little deeper.”

Joseph Romano, a teaching and learning coach at the Toronto District School Board who wrote his Master’s thesis on virtual reality in classrooms, helps teachers integrate Google Cardboard into their lessons. They’re also making their own, slightly bigger, cardboard devices to use with iPads.

“It’s something new, but it’s something that we’re tinkering with and making work in terms of a new technology to stay ahead of the curve,” he said.

However, he cautioned, while kids are ready to hop on the technology trend, the most important factor is building teachers’ capacity to understand how to effectively include it in daily lesson plans so that it really enriches learning.

Partners on the project include the Royal Ontario Museum, PBS, British documentarian David Attenborough and the American Museum of Natural History.

More than 100,000 students have now used the program, which launched in September. It first rolled out in the U.S., U.K., Australia, Brazil and New Zealand. Google aims to bring the kit to thousands of classrooms across the world this school year.

Canada is one of three new countries, including Denmark and Singapore, added in the latest round of the pilot program. They were chosen based on a high level of interest expressed by local teachers.

So far no other Canadian sites have been named, though the program first piloted in Guelph, Ont., last March.