You are here: Home » Articles filed under: 'News' » Article: 'Immunity from Seizure legislation'

The new legislation, flagged to be introduced in the Spring Session, will bring Australia into line with international standards.  It will also reassure overseas lenders that Australia is a competitive and secure destination for world class exhibitions and art loans.

The work of CAMD, with other cultural organisations, in advocating for the protective measures was acknowledged by the Minister in his announcement.

For further information see the Minister’s media release at: http://www.minister.regional.gov.au/sc/releases/2012/july/sc152_2012.aspx. 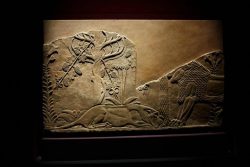 Frieze from the Wonders of Ancient Mesopotamia exhibition at the Melbourne Museum 4 May to 7 October 2012.
Positions Vacant » View All
» Senior Cleaner – MAGNT
» Exhibitions Coordinator – MAGNT
Latest News » View All
AAH NRI Roadmap exposure sub sees gaps
incl HAAS, research excellence & integrity Read more.
AIATSIS to open Alice Springs engagement
& digitisation centre with NT Govt support Read more.
Eric Gill’s Prospero & Ariel at the BBC
- judging the past & Ditchling Museum Read more.
Art attack – when vandals strike
- a glimpse of past causes & art vandalism Read more.
A letter to MoAD’s visitors & friends
& road to recovery after arson attack Read more.
Top +
Council of Australasian Museum Directors, c/o Ms Daryl Karp, Museum of Australian Democracy at Old Parliament House PO Box 3934 Manuka, Australian Capital Territory 2603 Australia, © CAMD 2022
Copyright: All information and resources provided on this website remain the copyright of the Council of Australasian Museum Directors. Permission is granted for viewing and downloading for personal and not for profit purposes. Those wishing to reproduce any materials for commercial, educational or other uses are requested to contact us.
Disclaimer: The content of this website is provided for information purposes only and is not intended as a substitute for professional advice. No claim is made as to the accuracy or authenticity of the content of the website. The Council of Australasian Museum Directors does not accept any liability to any person for the information or advice (or the use of such information or advice) which is provided on this website. The information on our website is provided on the basis that all persons accessing the site undertake responsibility for assessing the relevance and accuracy of its content. No responsibility is taken for any information or services which may appear on any linked web sites. Hostgator.
.