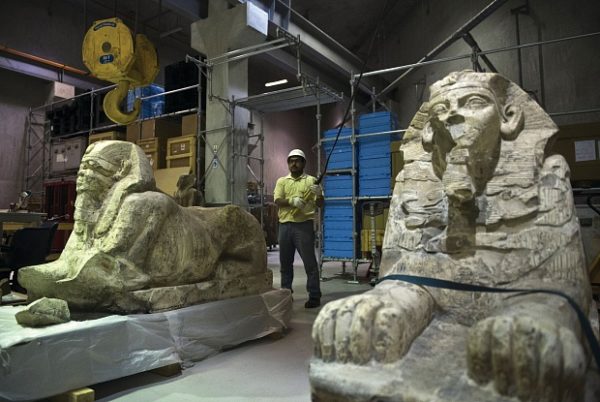 Silivia Mazza, Hannah McGivern, An edifice worthy of the pharaohs rises next to the pyramids, The Art Newspaper, 30 August 2016

The Grand Egyptian Museum (GEM), a gateway to the history of the pharaohs under construction outside Cairo, is attempting to do the impossible: hold its own next to the pyramids of Giza.

Egypt’s ministry of antiquities hopes the gargantuan complex, designed by architects Heneghan Peng, will be built by the end of 2016, paving the way for a 2017 “partial opening”, according to Daily News Egypt. But with between 3,000 and 5,000 construction workers already labouring around the clock and a budget rising to more than $1bn, museum management and the ministry will have their work cut out to meet the official 2018 deadline.

The GEM, announced by the Egyptian government in 1992 and originally scheduled to open in 2011, is poised to become one of the world’s largest museums. The 100,000-strong collection will include around 5,500 artefacts from the tomb of Tutankhamun, many of which have never been exhibited.