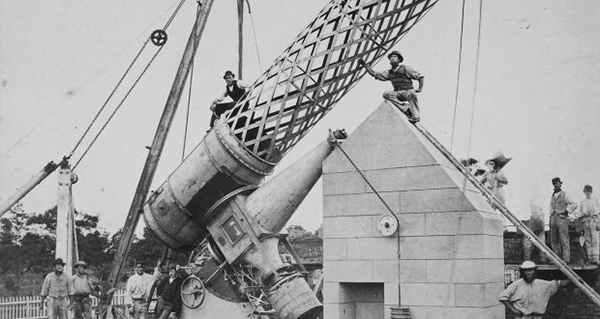 Great Melbourne Telescope: the instrument being installed in 1869, after it was shipped in pieces from the works of Thomas Grubb, in Dublin. Photograph: Museums Victoria.

In the 1860s the Dublin engineer Thomas Grubb built the world’s most advanced telescope.

On July 3rd, 1866, a dramatic event took place in the Dublin suburb of Rathmines, not far from the Grand Canal, in a workshop specially built for the creation of a giant telescope. The effectiveness of the telescope depended on the quality of the mirror, and it was this that was being cast, watched by a group of fascinated gentlemen. Two tons of speculum, an alloy of copper and tin, was melted in a furnace and then poured into a hoop-ring mould. The casting took three weeks to cool, after which the challenging task of grinding and polishing the mirror began. 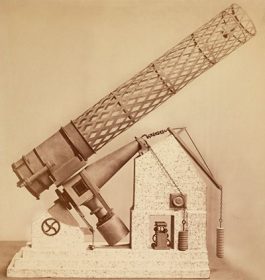 The creation was underway of the Great Melbourne Telescope, designed by Thomas Grubb with his son Howard, a 21-year-old engineering student at Trinity College Dublin, acting as supervisor. Thomas Grubb was an engineer who built telescopes and who was familiar with a very large telescope, nicknamed the Leviathan, built by William Parsons, the third earl of Rosse, at his observatory at Birr Castle, Co Offaly. Their shared knowledge was to prove crucial to the success of the enterprise.

The Great Melbourne Telescope project had been many years in prospect. The opportunity to explore the southern-hemisphere sky was an ambition shared by many astronomers, but efforts to persuade the British treasury to provide the funds for a giant telescope proved unsuccessful. Thomas Robinson from Belfast and the earl of Rosse received support from learned societies such as the Royal Irish Academy and the British Association for the Advancement of Science from the 1850s, but no money was forthcoming.

The breakthrough occurred as a result of the appointment of William Wilson, an Englishman who was a professor of mathematics at Queen’s College in Belfast, as one of the four foundation professors of the new University of Melbourne, which was founded in 1854. He promoted the idea of Melbourne as the location for a giant telescope, but it was 1866 before the Victorian colonial government voted to provide £5,000 for the project. Work began immediately at Grubb’s workshop in Rathmines, with helpful advice provided by the earl of Rosse. 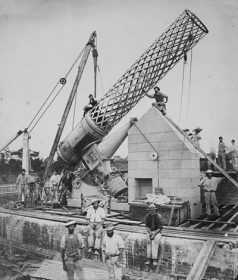 Great Melbourne Telescope: the instrument being installed in 1869, after it was shipped in pieces from the works of Howard Grubb, in Dublin. Photograph: Museums Victoria.

It took two years to build the telescope, which after testing in Dublin had to be transported to Melbourne, proudly bearing the builder’s plate: “Grubb Dublin 1868”. Installing it at a site selected for the purpose at the Botanic Gardens in Melbourne was a huge undertaking. The telescope weighed more than eight tons, and was made of metal, but was nonetheless a delicate instrument. Massive bluestone piers were required to support the telescope. It required a building to house it, constructed once the telescope had been assembled. The building had a sliding roof that could be retracted when the telescope was raised to allow observations of the heavens. It was the largest telescope in the southern hemisphere.

The telescope proved to be a great success. It operated for 75 years, until the closure of the Melbourne Observatory, in 1945. But that was not the end of the Great Melbourne Telescope. It was acquired by the new Commonwealth Observatory at Mount Stromlo, in Canberra, where it was rebuilt and refurbished. The extraordinary quality of Thomas Grubb’s engineering was apparent to the team undertaking the modernisation.

In 2003 disaster struck the Mount Stromlo Observatory. A bushfire raced out of control up the slopes of the hill, destroying 500 houses and causing three deaths. The observatory was badly damaged, and the Great Melbourne Telescope was left a distorted wreck. Despite the scale of the damage, enough of the telescope was left to contemplate an extraordinary project and to rescue the remains, with a view to rebuilding the telescope and reinstalling it in the original building in Melbourne that, fortunately, was still standing. 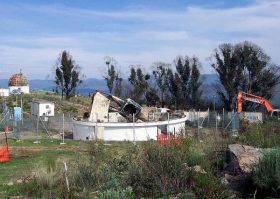 Three organisations came together to plan this project: the Astronomical Society of Victoria, the Royal Botanic Gardens, and Museums Victoria. The project was launched while I was chief executive of Museums Victoria, led by my colleague Dr Richard Gillespie, who has written an entertaining history of the telescope. The story of the Great Melbourne Telescope and its beginnings in Thomas Grubb’s workshop in Rathmines is far from over. It is a reminder of the time when the world looked to Ireland for the expertise to create the world’s most advanced apparatus for looking into the far reaches of the skies.

This Extraordinary Emigrants article was written by Dr J Patrick Greene, chief executive and museum director of EPIC The Irish Emigration Museum, in Dublin’s Docklands, an interactive museum that tells the story of how the Irish shaped and influenced the world