You are here: Home » Articles filed under: 'News' » Article: 'Guggenheim workers are looking to unionize'

Guggenheim workers are looking to unionize

June 13th, 2019 | Browse other: News. | Tagged with: Guggenheim Workers Are Looking to Unionize | 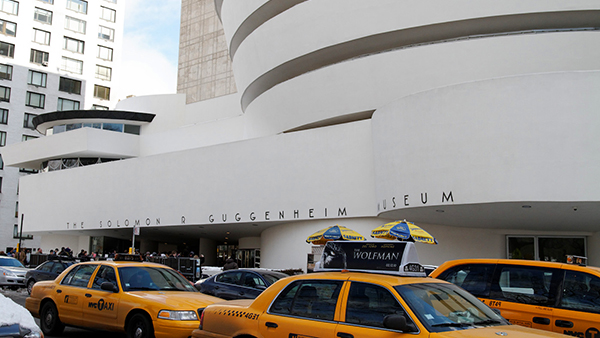 Around 90 workers are organizing for better wages and benefits. “It’s about transparency,” one worker said. “We have no autonomy.”

The domino effect of collective bargaining is hitting New York’s museums hard. Around 90 workers at the Solomon R. Guggenheim Museum have announced their intention to unionize.  Petitioners include art handlers and facilities staff working in exhibition construction. The decision follows several recent attempts by arts workers to organize for better wages and benefits in an industry notorious for low salaries and little chance of upward mobility.

The work can also be inconsistent. “The scheduling is such that they will book us for six weeks of work, and then we might get there and be told not to come in next week,” Heist explained to Hyperallergic over the phone. “There’s no recourse here. It’s about lack of transparency; we have no autonomy and no voice. If we enter negotiations, then we can set a standard.”

That line of reasoning has become common for workers looking for a fairer deal with their employers. Staff at the New Museum, MoMA PS1, SFMOMA, the Vancouver Art Gallery, the Tenement Museum, the Frye Art Museum, and the Brooklyn Academy of Music (BAM) are all in different steps of the process toward getting recognition from their employers.

Workers at the Guggenheim would see their proposed union join IUOE Local 30, a group that includes MoMA’s union. Their petition was filed last week, and the museum has since taken measures that union-seekers consider hostile toward their cause. This morning, the Guggenheim is holding meetings with their employees to “provide relevant facts around the situation” according to an email sent by the Guggenheim’s management. The museum also works with the employment law firm Epstein Becker Green, which a representative from Local 30 told ARTNews is “positioned to fight the workers.”

In a statement to Hyperallergic, a Guggenheim spokesperson said, “We have been informed that Local 30 of the International Union of Operating Engineers is seeking to represent a certain group of our employees. We respect the right of our employees to decide whether they wish to be represented by a union. This matter is now pending with the National Labor Relations Board.”

Like Heist, Megan Dyer worked at the Guggenheim as an art handler in the 1990s and has recently returned to the museum. According to her, she’s making only $3 more than she did three decades ago. And while compensation has remained stagnant, the institution has increased its protocols and standards of quality. Through the union, Dyer hopes that the Guggenheim can match salary with the respect its employees deserve. “It’s an institution devoted to art, but the people working there are also artists who aren’t currently able to afford their studios,” she said by phone. “Compensation levels haven’t raised to the levels necessary for living in New York.”

Guggenheim workers began discussing the prospect of unionization two months ago with a group of around 20 people. News spread by word of mouth until a larger coalition formed; workers say that they’ve also received support from curatorial staff and full-time employees in other departments at the Guggenheim. Discussions with the Guggenheim’s management had previously been supportive, if cautious, until recently.

“We are like this faucet that the Guggenheim turns on only when they need,” said another employee who has worked across art handling and facilities jobs for the last four years. He wished to remain anonymous for fear of retaliation by his employers inside and outside the museum world. “Employment policies like scheduling, overtime, wages, and benefits haven’t kept up with other institutions. We experience long hours, weekends, and no raises. There have been promises to fix all these things — and HR has repeatedly said they were looking into health insurance possibilities for us — but nothing happens. What option do we have to get a voice with management?”

Art handlers have also noticed a strain on industry veterans within the Guggenheim. According to the employee, one of the museum’s most experienced carpenters sliced his hand open on a table saw while preparing for an exhibition in fall 2017. he was okay, but the event was a shock to staff who believe that he was pushed to the brink by long hours and weekend work. Without regulations that a union might provide, there is a fear among employees that more incidents like this may arise.

“This is dangerous for the artwork and us,” the employee said.