The Chau Chak Wing Museum was announced as the winner of the three national awards at the Australian Museums and Galleries Association National Conference 2021 in Canberra, on Wednesday 9 June.

Gululu dhuwala djalkiri: welcome to the Yolŋu foundations is the first show presented in the Chau Chak Wing Museum largest exhibition space, the 420 square metre Ian Potter Gallery. It features 350 artworks from the University of Sydney’s collections and was created in collaboration with communities in eastern Arnhem Land.

On receiving the award, Rebecca Conway explained “we were guided throughout by Yolŋu social and philosophical concepts, and the exhibition design, layout and interpretation strategies were led by Yolŋu”. She continued,

Throughout the exhibition development and book production we worked to the idea that the process and the relationship are as important as the final product. Rebecca Conway, Curator

Director David Ellis said, “Yolŋu people have worked with the University of Sydney since the 1920s in Arnhem Land and from the 1970s in Sydney and this major project is the culmination of years of community-led research and collaboration. We are thrilled to have this significant achievement acknowledged with a national award”.

The project began on Country with curators Rebecca Conway and Matt Poll visiting the three communities in 2017. The following year a project team of Yolŋu elders and artists visited the University of Sydney to view the artworks in the collection and make key decisions about the selection of artworks and design development. Yolŋu were paid as expert consultants and new work was acquired from each of the collaborating art centres. The result is a culturally meaningful and visually spectacular exhibition and a book that explores how the relationship between communities and museums has changed over time. 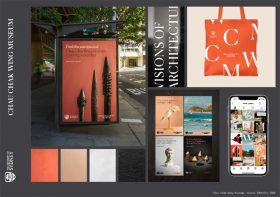 The Chau Chak Wing Museum is not just a new museum, but a uniting of three existing institutions and thousands of years of human history. The visual identity for the Museum needed to reflect the historical significance of the collections while representing a contemporary museum with a playful personality. University of Sydney graphic designer Katie Sorrenson said, “The identity I developed has two core elements, the primary typeface and a distinctive photographic style”. She continued, “The typeface, which is use graphically across the identity, is a contemporary serif which references the historical mark of the chisel. The photographic style, developed with in-house photographers Louise Cooper and Stefanie Zingsheim, brought to life hero collection items through dramatic lighting and textured surfaces”. 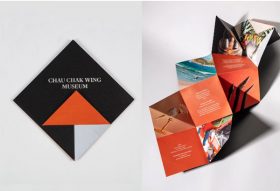 The invitation to the opening of the Chau Chak Wing Museum needed to express the once-in-a-lifetime nature of launching this purpose-built space at the University of Sydney. Designer Katie Sorrenson said, “The Museum’s tagline is ‘find the unexpected’ so the design process began with the concept of a reveal. The final origami-like invitation unfolds to become a kind of paper sculpture, with its many panels featuring stunning imagery from across the Museum’s broad collections”.