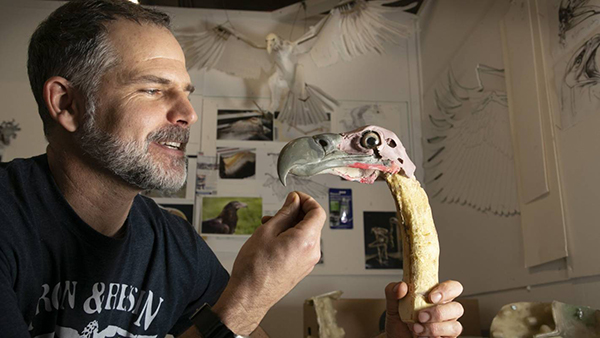 Eleanor Wenman, Behind the birds on display at Te Papa, Stuff, 25 June 2019

There’s boxes of feathers, bags of eyes and bits of birds scattered around. But don’t worry, they’re not real – mostly.

Yocum has been busy working at Te Papa over the last few months on the new Te Taiao exhibition, recreating extinct birds. That includes a full-size model of Haast’s eagle, an apex predator that hunted moa throughout the country more than 600 years ago.

“It came here and there was no competition, no natural enemies and it goes straight to the top of the food chain,” Yocum said, “eating moa protein shakes.”

Recreating the giant bird took Yocum around five months. He researched similar birds of prey, such as bald and golden eagles and even ended up turning to an American law enforcement guide on the trafficking of bald eagle feathers to get a better idea of what the Haast eagle’s feathers were like.

At its core, the bird is a metal armature, with an insulation-like foam around it. Over that is a combination of resins, silicones and epoxy to help give it shape and form features like the beak and feet.

Yocum will be going more in-depth on his creative process as part of the first Te Papa Friends Takeover: Access All Areas. On June 27, the museum will be opening its doors to members of Friends of Te Papa for a look behind the scenes.

Manager of the Friends programme Demi Heath said the evening, which included live music and a series of tours, was free and open to members, but people could sign up to the programme on the night to gain access.

As well as talks from experts like Yocum, areas of the museum that aren’t normally open to the public will be up for exploration, including the library on the mezzanine floor and the learning lab Hīnātore.

* Te Papa’s Friend Takeover: Access All Areas is on June 27 between 6.30pm and 9.30pm with tours taking place throughout the night. To find out more or to sign up to the Friends programme, visit friendsoftepapa.org.nz.