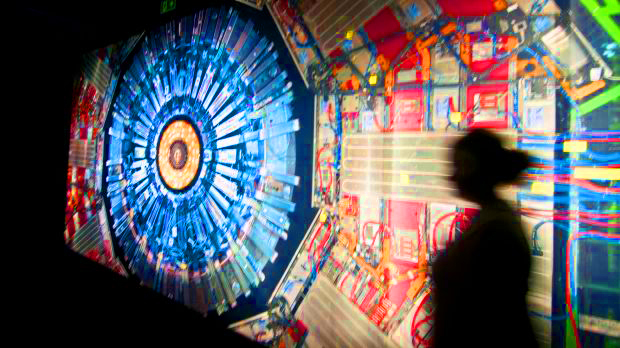 Visitors can see for themselves what a section of the 27 kilometre tunnel looks like. Photo: Robert Shakespeare. Source: Sydney Morning Herald.

The world’s largest scientific experiment, a 27-kilometre circular underground tunnel built to smash particles into each other, has been recreated at the Queensland Museum for the public to learn more about how our universe works.

Hadron Collider: Step inside the world’s greatest experiment is an exhibition that gives you a behind-the-scenes glimpse into the particle physics lab at the European Organisation for Nuclear Research (CERN) where the Large Hadron Collider, a tunnel built under the border between France and Switzerland, operates.

CERN’s $4.4 billion dollar LHC is a ring of superconducting magnets with a number of accelerating structures that forces two high-energy particle beams to travel close to the speed of light, before colliding.

The task of making them collide has been likened to firing two needles about 10 kilometres apart with enough precision that they meet halfway.

“Visitors can talk to virtual scientists, walk the tunnels of CERN, explore the control room and stand in the heart of a particle collision,” she said.

The LHC is one of the coldest places in the universe at minus 271 degrees Celsius and contains some of the most powerful magnets on earth.