You are here: Home » Articles filed under: 'News' » Article: 'Has the blockbuster exhibition had its day?'

Has the blockbuster exhibition had its day?

February 5th, 2021 | Browse other: News. | Tagged with: COVID-19, Has the blockbuster exhibition had its day?, will institutions be forced to stop relying on spectacular shows | 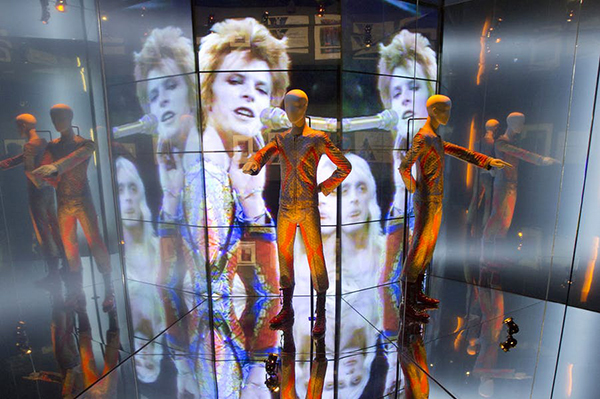 Has the blockbuster exhibition had its day?, Apollo, 1 February 2021

When we can visit museums again, or visit them more freely, will institutions be forced to stop relying on spectacular shows and measuring their success in visitor numbers – and is that something to be welcomed?

Worries that have reached my ears from within museums, and from fellow members of the public who are most keen to visit them, relate to the current exhibition programme. Such worries reflect the pre-eminence of exhibitions in the experience of art today. Exhibitions are what critics are waiting for, what curators are most likely to be working on, and what most occupies the registrar, the press office, the shop, the restaurant and the development team. Exhibitions are what the trustees notice most. The success of a director is most commonly measured by their popularity. Moreover, exhibitions are crucial for supporters and, of course, for sponsors. To yearn, as I often do, for the time when the primary focus of a museum was its permanent collection is as futile as lamenting our dependence upon the family car. The future lies with a different type of exhibition, just as it will involve a different type of car.

Before speculating on the future character of exhibitions it is worth reflecting on what is generally meant by the ‘normality’ to which so many earnestly hope to return. Normality only means what resides most easily in the memory: that is, the situation a year or so ago – or, rather, the best exhibitions that were available. There were then more big art exhibitions in London than could be seen by anyone save its most energetic retired residents. While not necessarily improving in quality, exhibitions were increasing in number and were competing against each other. Moreover, a decade of relentless government cuts had driven the pursuit of sponsorship to a point that inhibited collaboration between institutions.

It is likely that available sponsorship will decrease dramatically. Government funding will also surely diminish with the massive rise in unemployment and the increased support for the health service and the police – to say nothing of the cost of addressing the climate crisis. It is also worth noting that the reduction in public spending has affected the civil service even more than museums, so that planning for the future and guidance on any matter beyond cabinet-office obsessions (such as meddling with trustee appointments) has become increasingly unlikely.

Policy will be driven by slogans: global soft power (good), London-centricity (bad). National museums which have raised funds by lending their works to the Gulf or to Asia are liable to be urged to continue to do so more often and on a larger scale, not as a supplement to, but as a substitute for, their government grant, and to deploy the Union Jack when doing so. This would depend on the political climate and the continuing appetite of the host nations; it might also require disregarding an environmental lobby. It is more certain that national museums will continue to be encouraged to send major works on regional tours. They may even be obliged to provide curatorial and conservation support for the many regional museums that have been abandoned by local government.

The type of exhibition most likely to thrive will be a creative rearrangement of one part of the permanent collection, with the addition of a few key loans, usually from local institutions. The cost would be recovered by an admission charge and by closing other portions of the permanent collection. There have already been numerous exhibitions of this kind. They can be exciting and intelligent, although usually when devised on a small scale. They will not be regarded as blockbusters, but if we mean by that term something that makes a huge impact and draws large crowds, then we should recall that this was achieved by the single-picture exhibitions that took place in the National Gallery during the Second World War. Rationing and fasting sharpen the appetite and deepen appreciation far more than the glut of shows that were available in the recent past.

The increasing numbers of major works in storage and the temporary closure of large parts of the permanent collection are in fact already accepted as normal conditions and there is not likely to be a great outcry over the further fading of the idea of the museum as a resource for self-education and independent exploration, and as a corrective to contemporary values and assumptions. Nevertheless, reduced access to art that belongs to the public will be as serious a consequence as the shelving of many ambitious and worthwhile exhibitions in the lean years ahead.

Nicholas Penny was director of the National Gallery from 2008–15. 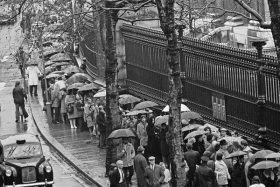 Queues for the ‘Treasures of Tutankhamun’ exhibition outside the British Museum in 1972. Photo: Steve Wood/Evening Standard/Hulton Archive/Getty Images).

On 29 March 2022, it will be the 50th anniversary of the opening of ‘The Treasures of Tutankhamun’ at the British Museum, a show that was seen by 1.6m visitors. Although there had been many popular exhibitions before 1972, notably ‘Britain Can Make It’ at the V&A (1.5m visitors) in the autumn of 1946, this year conventionally marks the beginning of a new era in museum exhibition making. But is it over?

The Tutankhamun exhibition was part of a broader shift in the museum sector. As institutions expanded and grew in number, innovative directors worked to attract more visitors. This was against a backdrop of increased social mobility, expanding higher education and rising leisure expenditure. Today, for any institution that receives significant public subsidy, maximising public accessibility is essential to securing continued support. Given the financial burden of complex buildings and huge collections, the tools available for delivering major upticks in social engagement are limited, and popular exhibitions are one of the ways to open the doors wider. In a global marketplace, brand identity is ever more important and blockbusters are a means of enhancing and projecting this both locally and through international tours.

Blockbusters can also contribute to the perennial challenge of funding. There is a relatively clear ‘boilerplate’ financial model: at around 200,000 visitors in tandem with an excellent retail offer, a blockbuster should be able to deliver more than £500,000, with additional income from sponsorship, touring and other partnerships. There are few institutions so well funded that they can ignore this model. It is the equivalent of the Christmas pantomime for most local theatres in the UK.

But, of course, now there are other considerations affecting the blockbuster. Most pressingly this year and last, when gatherings have become illegal, the packed galleries, craning necks and jostling elbow to elbow, seem both thrilling and impossible to imagine. Alongside this there is an ever more pressing need to be mindful of the environment. Flying exhibits, curators and conservators around the world – and inviting visitors to follow them – no longer seems the right thing to do. Nor does building a set and throwing it away. Institutions, sponsors, design firms and the public all want to know that they are not contributing to the worsening of the situation. Any installation that comments on climate change simply cannot be part of the problem and requires a plan to avoid it being so.

Last month the New York Times published a piece about commercial organisations nibbling at the margins of cultural attractions. Museums have in the past enjoyed a near monopoly over the making of exhibitions, but as some exhibitions have moved closer to entertainment in subject, design, visitor experience and commercial success, the business sector has become interested. Many companies are focused on multi-platform operations and see a continuum from physical releases such as exhibitions, to digital ones, through gaming and AR. Digital cultural attractions, such as the Atelier des Lumières in Les Baux and in Paris, demonstrate how digital technology can be commercially successful with the format now being rolled out to the former U-boat pens of Bordeaux and beyond.

But we are confident that the object-based blockbuster can flourish if public institutions continue to deliver excellence. Along with the demise of the blockbuster, there has been much discussion of the demise of the physical artefact. But our experience suggests that the easier it is to see everything online, the more excited people are about the physical, authentic object. David Bowie’s hand-written lyrics, David Gilmour’s guitar – these have almost mythic status. And, crucially, we are all longing to be part of an audience again; at a gig, theatre, a museum or a festival, we want to experience these alongside others.

When London Design Biennale opens at Somerset House in June, it will be one of the first exhibitions off the block in the UK. Imagining the thousands of visitors gathering together, mingling in the sunshine seems impossibly exciting. The patient has proved remarkably resilient and while it may yet be a victim of ‘long Covid’, we predict a full recovery.

Victoria Broackes is director of London Design Biennale. Geoffrey Marsh is director of the Department of Theatre and Performance at the Victoria and Albert Museum. They co-curated ‘David Bowie Is’ and ‘You Say You Want A Revolution?’ (both at the V&A).