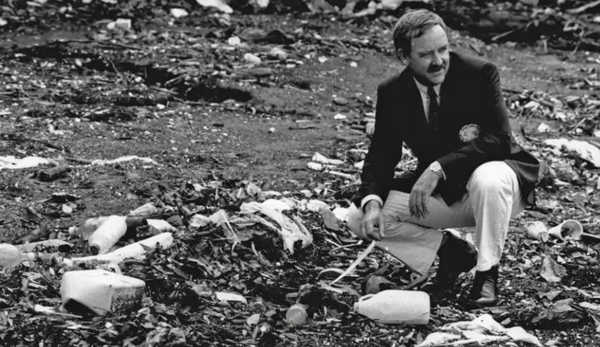 Ian Kiernan among the litter at Balls Head Bay, Wollstonecraft, for the first Clean Up Australia Day in 1989. Photo: Brendan Read.

Kim McKay, ‘He changed the future’: The Ian Kiernan I knew, The Sydney Morning Herald, 18 October 2018

We didn’t realise Sydney Harbour had 270 kilometres of foreshore when a team of enthusiastic volunteers came together to try and clean it up back on January 8, 1989.

Nor did we understand just how much rubbish had been dumped in one of the most beautiful harbours in the world – more than 5,000 tonnes – and that it had been used as a garbage tip since white settlement.

And we certainly didn’t realise that the group’s leader, Ian Kiernan, a knockabout Sydney builder and solo sailor would go on to be one of Australia’s most renowned and respected environmentalists, founding Clean Up Australia, Clean Up the World and made 1994 Australian of the Year among so many other honours.

Sailing through the Sargasso Sea mid-Atlantic, he had an epiphany – he was crossing one of most mythical seas in the world, surrounded by plastic buckets and bags, toothpaste tubes, combs, thongs and all sorts of human non-degradable waste. He realised that, as a builder, he’d sometimes discarded his own building waste irresponsibly.

Ian always said he felt emboldened by finishing the BOC race, and after sailing with his family one weekend on Sydney Harbour, he decided he would do something about the tide line of broken glass and discarded plastic along the beaches around the harbour.

He walked into my office the following Monday. Years earlier he’d seen a beach clean-up in Hawaii. Did I think it would work here, he asked? I did and swung around to my old golf-ball typewriter and wrote the first letter to the then NSW minister for ports, Laurie Brereton, suggesting that Ian could chair a group to organise a community clean-up.

Six weeks later his department replied: no thanks – they were responsible for the cleaning of Sydney Harbour. Ian always said there was nothing like a “no” to challenge you and that a good idea at the right time will succeed.

His enthusiasm and determination inspired a group of his friends to get behind the idea. Alan Morris and Alan Johnson of Mojo advertising fame came on board and wrote one of their renowned jingles…”Sydney Harbour’s pretty sick, looking like a garbage tip, Yuck. It’s enough to make you sick…yucky yucky yucky poo, there’s something you can do”.  All the kids started singing it. Others  came on board: lawyer Victor Kelly, John Henderson, Emily ONeil and me. John Singleton got involved and helped find some corporate support. He even urged Dawn Fraser to lend a hand. The Herald  became a supporter and ran stories every few days in the lead-up to Clean Up the Harbour Day.

Forty thousand Sydneysiders turned out that day and removed a staggering amount of rubbish at more than 100 clean up sites around the harbour. Ian said the harbour turned the corner that day – that it was never to go back to how it was after so many people had given their time on a sunny Sunday to clean it up. Years later, Sharon Beder, in her book Toxic Fish and Sewer Surfing credited Clean Up Sydney Harbour alongside the Herald’s ground-breaking story about the level of toxicity in fish caught off Sydney and the Poo March at Bondi as the back-to-back events that led to a new environmental awareness wave that swept across our city, state and nation.

The phone started to ring the next day with people all around Australia asking how we did it and could they do it too? Clean Up Australia was born the following year and prime minister Bob Hawke turned up in gum boots with a rake! That’s the only way we said politicians could participate.

Clean Up has happened every year since with Kiernan at the helm, focussing our national attention for 30 years on the need to reduce waste, stem our use of plastics and not throw our garbage in waterways, the ocean, bush land, roadsides and parks.

In the first 10 years, we produced an annual Rubbish Report documenting how much and what type of waste was collected. Plastic soft drink bottles and plastic shopping bags as well as cigarette butts were always in the top 10. It was citizen science in action.

Not long after Clean Up Australia started, we were approached by the United Nations Environment Programme and Clean Up the World was born – a free, open-source community based virtual campaign, all before the internet was invented. Communities in more than 100 countries became involved and we travelled to many countries and visited endless garbage dumps in developing countries to inspire them about taking positive environmental action.

It’s hard to fathom how much Kiernan’s efforts and belief in community action to solve environmental problems has impacted Australia and the world. He changed the future of Sydney Harbour and help set it on a new course. In the 1990s he also spearhead the use of new technology including a water treatment plant at Taronga Zoo to deal with animal effluent flowing into Sydney Harbour. He campaigned endlessly for Container Deposit Legislation to be introduced in NSW and in other states following the South Australian example.

Kiernan would have loved having a Sydney Harbour ferry named after him; the public voted for that. It would have been a fitting tribute to his leadership on the environment. But politics seemed to get in the way as it often does where the environment is concerned.

His original efforts should not be forgotten as a new generation of environmental campaigners come to the fore to ban the plastic bag or clean up a beach or advocate for clean waterways. He helped show us that an individual can make a difference and that a lot of people working together can change things for the better.

He was one of a kind – not perfect – but with a larrikin streak and a ridiculous sense of humour that could break all tensions and have you laughing for hours. He often described himself as just a simple builder, an ordinary bloke committed to improving our environment for the future and his commitment and authenticity shone through. He was anything but ordinary and hopefully “Bikky” as he was known to his friends, who was an accomplished celestial navigator, has embarked on his final ocean crossing guided by the stars.

Kim McKay is the co-founder of Clean Up Australia and Clean Up the World and is now the director and chief executive of the Australian Museum.