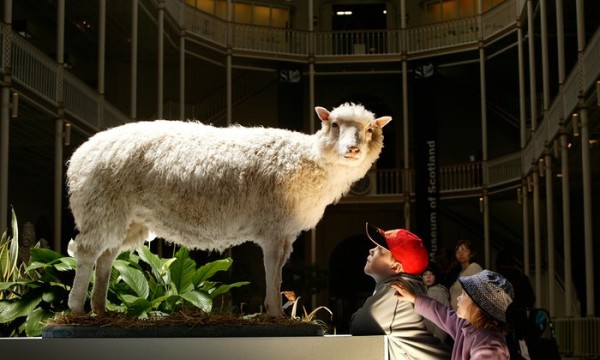 The final remains of Dolly, the worlds first cloned sheep, who has been stuffed and mounted and is on display at the Royal Museum of Scotland in Edinburgh. Photo: Murdo Macleod for the Guardian.

It is one of those bright, cold mornings in which Edinburgh seems to specialise. The golden cockerel atop the spire of St Giles’ cathedral is etched against a pale blue sky, hawked spit (for good luck) has frozen on the nearby Heart of Midlothian and an early tourist pats the frost-rimed head of Greyfriars Bobby. If that faithful wee dog could see, he would surely recognise, across Chambers Street, a similar example of fidelity: the National Museum of Scotland (NMS) is about to open for the day, just as it has for the past 150 years.

“This is a hugely important moment,” says NMS director Gordon Rintoul of his institution’s 150th anniversary this year. “It’s a once-in-a-century opportunity to make a major transformation and turn this into one of the world’s great museums.”

Over a cup of tea in his top-floor office with its grand view over the city, Rintoul explains that the milestone is being marked by the last major phase of a radical overhaul. On 8 July, 10 new galleries will open, six dedicated to science and technology, the remainder to decorative art, fashion and design. This reconnects with the vision of its Victorian founders: in 1866, when it first opened, it was called the Edinburgh Museum of Science and Art. The construction of a new wing, in 1998, added Scotland’s historic treasures, and the NMS now covers everything from archaeology to zoology.

Its curators say it is the equivalent of the British Museum, V&A, Natural History Museum and Science Museum all under one roof – though detractors sneer that a museum of everything ends up as one of nothing.

“All I know is that people are voting with their feet,” says Rintoul. It is the most visited museum outside London.

The new galleries are taking shape. Five planes hang from the ceiling, among them Percy Pilcher’s Hawk glider, Britain’s oldest surviving aircraft. It’s an alarming-looking apparatus of cotton, bamboo and wire, which the Glasgow-based aviator was flying when he crashed in 1899, later dying from his injuries. The Hawk, like all 3,000 artefacts destined for the new galleries, was restored at the National Museums Collection Centre in the north of the city. This unprepossessing campus of hangars is where some 12 million objects, two million of which are insect specimens, are stored and conserved when not on display.

Heather Caven, who leads the conservation team that has spent the past four years preparing for the new galleries, describes the centre as “the beating heart of our collection” and it is not difficult to see what she means. Walk at random into one of the laboratories and you will see young women in white coats and protective gloves removing varnish from a 15th-century sculpture of Saint Sebastian, using electrolysis to reduce tarnish on a silver tongue-scraper belonging to Napoleon’s sister, and fixing the handle of a black Schiaparelli handbag. This is a place where centuries collapse under the attentive touch of the conservators.