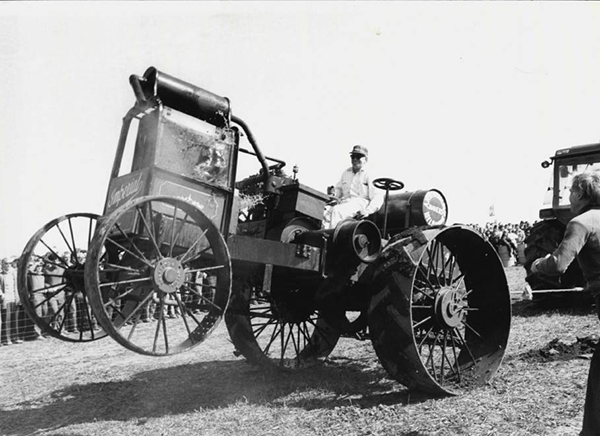 OLD WARHORSE: Passionate South Australian collector, the late Kevin Rohrlach, from Angaston in the Barossa Valley, once owned the rare McDonald Imperial pictured here participating in a tractor pull in the 1970s.

Hopes are rising that an extremely rare 109-year-old Australian farm tractor will soon arrive back home.

The McDonald Imperial EB model internal-combustion tractor, sold new in 1912, was knocked down for $US283,500 in an online sale run by American auction house, Aumann last June.

The sale angered Australian collectors of vintage farm machinery, none more than John Edgar from Drumborg in south west Victoria.

Mr Egar has been agitating to get the McDonald back to Australia and said its new Australian owner had confirmed its return and that it would probably be put on public display in Canberra.

The two-cylinder, 20 horsepower machine, built by A. H. McDonald, Australia’s first tractor manufacturer, was saved from the wreckers in the 1960s and passed through the hands of two passionate local collectors before it ended in the US 2008.

Mr Edgar and fellow collectors are now campaigning the return of another rare Australian tractor, an International Titan.

The Titan D 20 horsepower tractor dates from late 1912 and is thought to be one of only six remaining in the world. 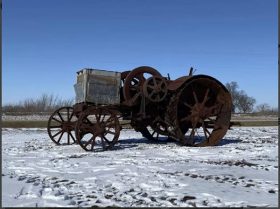 WILL YE NO COME BACK AGAIN?: This rare Australian-owned International Titan D 20 horsepower tractor is scheduled for auction i the United States on April 24.

They believe the export of both tractors contravened Australia’s Movable Cultural Heritage Act.

A letter has been sent to federal Arts Minister Paul Fletcher alerting him to next month’s scheduled sale of the Titan and urging him to take action.

Mr Edgar said they had received a reply from one of Mr Fletcher’s aides who indicated the Minister would be sending them an official response.

“However, if it does go to auction and is purchased by another party, it does not change the status of the tractor, it is and always will be an illegally exported item protected by the Movable Cultural Heritage Act and can be seized at any point by the government,” Mr Edgar said.