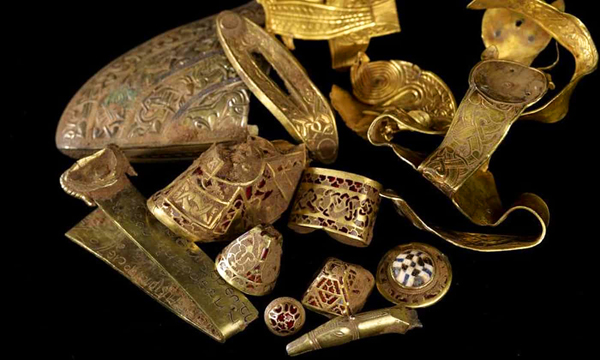 The Staffordshire Hoard, on show at the Potteries Museum. Photograph: AP.

Domestic visits fall even as foreign tourism rises, amid concerns over soaring ticket prices and safety.

The number of visitors going to England’s major museums and galleries is in steady decline – and the pinch on personal incomes, ticket prices and the terror threat are thought to be to blame.

New analysis of official government figures carried out by the Art Newspaper, and studied in comparison with the journal’s attendance statistics, confirms that Britons are making fewer trips to see exhibitions. According to a report to be published on Monday, and shared with the Observer, the “disturbing trend” remains dominant, despite the short term impact of a succession of one-off blockbusters, such as Tate’s popular David Hockney show.

Sandy Nairne, who was the director of the National Portrait Gallery until 2015, suspects that money worries are behind the drop in visitor numbers, adding that “pressures on people’s personal budgets are real, and the consistently rising cost of travel has to be a factor”.

Mark Jones, who ran the Victoria and Albert Museum until 2011, agrees, putting the slump down to “static or declining household incomes”.

The Department of Culture, Media and Sport’s figures show that while 50.8 million visitors went to the 15 museums funded by the central government over the financial year from April 2014, the number for the financial year ending next week will be down to about 46.5 million.

The Art Newspaper’s annual attendance survey, carried out over each calendar year, reflects the same sudden fall that followed a peak figure of 25.5 million visitors to the six main national art museums in 2014. Last year almost two million fewer made a visit.

The depth of the fall can be partly explained by the government’s exclusion since 2016 of figures for the museums in Tyne & Wear, which are no longer funded in the same way. Yet, even taking this into account, 2.5 million, or 5%, of visitors have disappeared over the past three financial years.

And it is the British who are failing to show up, rather than international tourists, the Art Newspaper will explain in a special report carried to mark its 300th edition.

Foreign tourism to the UK has been increasing at around 5% a year since 2015, encouraged by beneficial exchange rates since the Brexit referendum. This should have boosted museum attendance figures, so it seems that it is the British who are staying at home.

The experience at the National Gallery in London underlines the point. When visitor numbers declined last year, director Gabriele Finaldi told his trustees that “overseas visitor numbers were not down and the fall in numbers seemed to be from the United Kingdom”.

Despite standout hits, including the Pink Floyd show at the V&A, which helped drive attendance up by 26% to 3.8 million, and three blockbuster art exhibitions at the Royal Academy in London, experts from the museum and gallery world believe ticket price rises introduced following government cuts have put off the public. Standard tickets for Tate Modern’s current exhibition Picasso 1932 cost £22. Two years ago, tickets for the gallery’s hit show Henri Matisse: the Cut-Outscost £16.30. This is a rise of 35% in four years.

School visits and educational group trips have been particularly affected by both financial concerns and the fears that have followed terror attacks in public spaces. Visits by children aged under 16 were down 6% on the previous 12 months in the financial year 2016-17.

Earlier this month, British tourism chiefs blamed a drop in visitor numbers at London’s top attractions on the high cost of travel, food and drink. Bernard Donoghue of the Association of Leading Visitor Attractions said visiting London was now proving too expensive for many.

There is a whole world outside London – and a host of great museums. The director of the V&A chooses his pick in the rest of the country

On the 300th anniversary of the birth of Thomas Chippendale, a definitive exhibition of this son of Otleyis a perceptive account of how he defined the 18th-century aesthetic. Ends 8 June

The key regional museum to head to as Tyne and Wear hosts the Great Exhibition of the North, complete with spectacular loans and a superb public programme. From 22 June to 9 September

Exhibition exploring Margate’s influence on the writing of The Waste Land by TS Eliot and the response of visual artists to the work. Ends 7 May

After the V&A, of course, this Hanley jewel contains the finest collection of ceramics in the country and, with the Staffordshire Hoard, the greatest display of Anglo-Saxon treasure outside the British Museum.

And don’t forget V&A Dundee, which opens on 15 September.