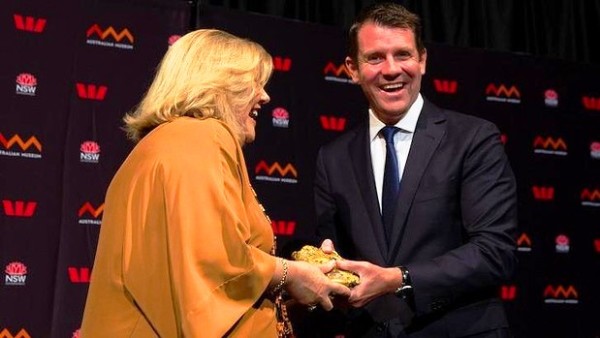 Westpac will be given naming rights to the Australian Museum’s Long Gallery after stumping up one-third of the $9 million cost of renovating the space.

Australian Museum director Kim McKay said it was “appropriate” to give naming rights to the bank for a 10-year period.

“To be honest, in these times you have to give the benefits to a sponsor as well,” she said. “It is not a straight philanthropic donation.”

The museum was also given $3 million by the NSW government, which was announced by Premier Mike Baird on Wednesday.

It will raise the remaining cost of the renovation by seeking philanthropic pledges for 200 items, including a thylacine pup specimen, that will be displayed in the Long Gallery once it reopens in 2017.

McKay and the Premier also paid tribute to the museum’s staff, whose numbers are being substantially reduced through a program of forced and voluntary redundancies.

The launch of the funding deal was also accompanied with the long-term loan of Australia’s first bank note and the Maitland Bar Gold Nugget.

The nugget, weighing more than 10 kilograms and worth $3.7 million, is on loan from the NSW Treasury, whose officials had been using the precious object in games of “hallway cricket”, Baird said.

McKay said the 12-month restoration of the Long Gallery – stage two of the museum’s major building plans – would make it the “must-see” exhibition space in Australia.

She said galleries and museums had to follow sport in seeking corporate sponsors as well as public funding.

“The days are long gone where a cultural institution can just survive on a government grant each year,” she said. “We have to be able to raise additional funds.”

Like other major state institutions, the Australian Museum is planning a major redevelopment of its CBD site to “deliver an iconic building project”, according to its annual report. It has been given $4.72 million to develop a master plan that will be submitted to the NSW government at the end of 2016.

McKay said she would like to open up the courtyard formed by the museum’s three historic sandstone buildings, and redevelop a 2700-square-metre parcel of land presently used as a car park.

The NSW government has pledged $600 million for cultural infrastructure from the sale of electricity assets, but has also promised more than half of that money to renovate Sydney Opera House ($202 million) and wharves at Walsh Bay ($139 million).

Several other major cultural institutions – Art Gallery of NSW, Powerhouse Museum – as well as arts centres in western Sydney are bidding for the rest of the money.