You are here: Home » Articles filed under: 'News' » Article: 'Historical detection in Ballarat' 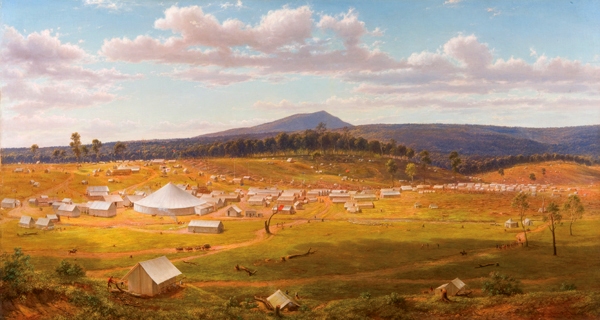 Historical detective work by Sovereign Hill, its heritage lawyer and consultant surveyor has led to one of Ballarat’s lost Eureka sites, the first Gold Commissioner’s Camp of 1851, finally being identified.

“We were delighted when we found the Camp’s exact location,” Sovereign Hill’s Chief Executive Officer Jeremy Johnson said. “As eminent historian, Professor Weston Bate has said, this place marks a defining moment in our nation’s democracy.”  The initial Gold Commissioner’s Camp was one of the first locations where goldfields licences were issued and sowed the seeds of an oppressive system and arbitrary discretions that sparked protests culminating in the Eureka uprising of 1854.

‘Urquhart’s first survey of Ballarat laid out the township grid for sale and showed key locations, including the Gold Commissioner’s Camp.  Sovereign Hill’s Gold Museum holds a rare copy of this important survey undertaken in the last months of 1851 and approved in early 1852,’ he said.

“The early surveyors, in laying out land allotments for sale or licence, were required to use local Aboriginal names and guides.  Yet the profits from sales and licences were not paid to them”, said Dr Kelleher.  “So Urquhart’s survey tracks an important transition occurring at Ballarat from 1851.”

The detective work arose when objectors to a development near Sovereign Hill nominated another site as the Camp’s location. Extensive research showed this to be incorrect. The Executive Director of Heritage Victoria undertook separate enquiries and arrived at the same conclusion as Sovereign Hill on the location of this historic site.

The Heritage Council has now rejected the objectors’ nomination and confirmed the location revealed by the detective work.

Kelleher began with an 1851 William Strutt watercolour depicting the Gold Commissioner’s tent, a watercourse and a track with the notation “Commissioner’s Quarters, at end of road, ascending hill”.

“While it initially seemed clear that the track in this image curved along the rise just above the river flats, it all proved a bit too mathematical for me. Having worked with surveyor Rodney Aujard before, I knew he would have some good ideas – and also be willing to tell it to me straight if our case was at risk.’’

Though Aujard was sceptical at first, he was drawn to the old surveys. “We began our research with Urquhart’s Survey of 1852,” he explained. “Magnifying the print enabled us to read the street names on the town plan. We drew a line between the Commissioner’s Tent and the distinct indent of land on Lake Wendouree and positioned it on the town blocks.”

This “control line” was overlaid on later surveys, VicRoads Map 566 and LandVic’s current digital map base. The Camp’s location was pinpointed at the three-way intersection.

“It was clear the early surveys accurately reflected the current street layout of central Ballarat and were to scale,” Kelleher says. “No further research was needed.”

This evidence was corroborated by historical documents, newspaper articles and memoirs written by the earliest miners arriving on the new goldfield at Golden Point.

Kelleher hopes the City of Ballarat will appropriately mark the historic spot and include its relationship with the Yarrowee Creek and river flat diggings as part of its recently released historic landscapes study.  A high resolution reproduction of the first Urquhart survey is proudly on display at the Gold Museum.

Positions Vacant » View All
» Exhibition Experience Developer – Te Papa
» Operations & Science Centre Mgr – Otago Museum
Latest News » View All
MV’s Melbourne Museum turns 21
- 21 things about MM Read more.
ANA Analysis Paper – 21st century priorities
for Australian arts and culture policy Read more.
Science Museum announces Energy
Revolution: The Adani Green Energy Gallery Read more.
IWM unveils second world war & Holocaust
galleries – 7 year project Read more.
Indigenous cultural heritage ‘at risk’
until new protection laws pass Read more.
Top +
Council of Australasian Museum Directors, c/o Ms Daryl Karp, Museum of Australian Democracy at Old Parliament House PO Box 3934 Manuka, Australian Capital Territory 2603 Australia, © CAMD 2021
Copyright: All information and resources provided on this website remain the copyright of the Council of Australasian Museum Directors. Permission is granted for viewing and downloading for personal and not for profit purposes. Those wishing to reproduce any materials for commercial, educational or other uses are requested to contact us.
Disclaimer: The content of this website is provided for information purposes only and is not intended as a substitute for professional advice. No claim is made as to the accuracy or authenticity of the content of the website. The Council of Australasian Museum Directors does not accept any liability to any person for the information or advice (or the use of such information or advice) which is provided on this website. The information on our website is provided on the basis that all persons accessing the site undertake responsibility for assessing the relevance and accuracy of its content. No responsibility is taken for any information or services which may appear on any linked web sites. Hostgator.
.