You are here: Home » Articles filed under: 'News' » Article: 'History of World Exhibition'

October 24th, 2016 | Browse other: News. | Tagged with: British Museum, History of the World in 100 Objects, National Museum of Australia | 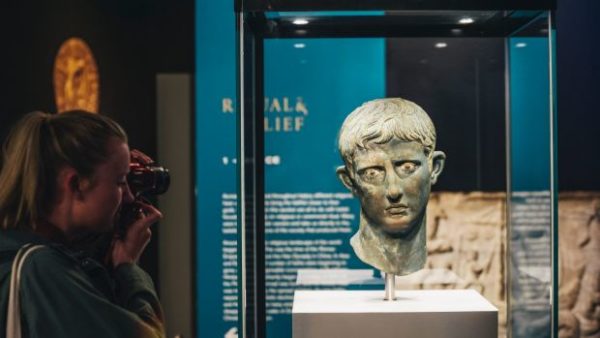 The National Museum of Australia’s History of the World in 100 Objects from the British Museum exhibition has been seen by more than 50000 visitors. Kate Spencer of Macquarie takes a photograph. Photo: Rohan Thomson.

Is it the bronze head of Augustus, or the Lewis Chessmen?

There are so many objects upon which to fixate at the National Museum of Australia‘s current blockbuster – 100 to be precise, all sourced from the British Museum – that it’s impossible to name a drawcard. Or it could be that people just love a good list.

Whatever the reason, more than 50,000 people have already filed through the doors to see A History of the World in 100 Objects, and it’s only been open six weeks.

Museum director Mathew Trinca said the show was already well on its way to being the museum’s most popular exhibition in its own short history, with more than three months still left in its run.

He said the exhibition – which has already travelled to several countries, including Japan – had clearly hit its mark, with its eclectic mix of objects from across the globe.

“There’s a kind of discipline that comes from [having] 100 objects to tell this extraordinary span of human history,  two million years, and people are stimulated to think, well … what else I would put in the show? I think the premise is really strong.”

“It’s absolutely playing into our fascination with lists, but in the context of seeing unbelievable things that comprise that list … a premise that’s really easy to grasp and quite delightful.”