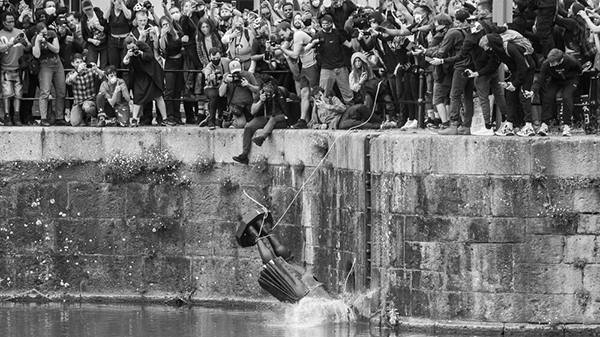 Four protestors have been cleared of toppling the statue in June 2020.

Attorney general says jury’s decision may be referred to Court of Appeal. 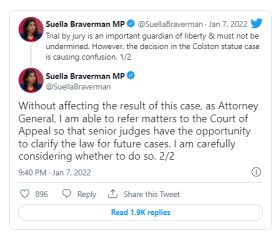 Museum and heritage professionals have been giving their reaction to a jury’s decision to clear the four protestors who toppled Bristol’s statue of slave-trader Edward Colston.

Jake Skuse, 33, Rhian Graham, 30, Milo Ponsford, 26, and Sage Willoughby, 22, accepted they had pulled down the statue during a 2020 Black Lives Matter protest but were acquitted of criminal damage on 5 January.

The attorney general Suella Braverman indicated today that the decision may be referred to the Court of Appeal in order to clarify the law for future cases, after senior government figures criticised the jury’s verdict.

The outcome of the trial was welcomed by many in the heritage sector. David Olusoga, historian and author of Black and British: A Forgotten History, told Good Morning Britain yesterday, said: “For thousands of people whose ancestors were enslaved by Colston and men like him, it is offensive. 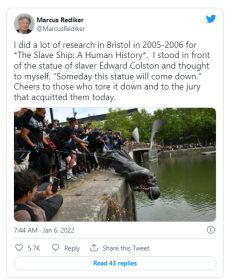 “You can talk to thousands of people in Bristol who found it offensive so I think this idea that a statue is somehow benign or harmless depends on experience, where you’re coming from and what your family background is.”

He continued: “I think what this verdict shows is that when people are given the evidence about Edward Colston, about Britain’s involvement in slavery, and about the cult that was built in Bristol in the 19th century around Edward Colston, when they get that information directly, rather than through tabloids or through journalists or through politicians, they actually react to that evidence rather than to the culture war that has been built around it.

“Most people don’t understand the details or this history of this statue and the long campaign to have it removed peacefully.”

The International Slavery Museum, part of National Museums Liverpool, said “it was history that was placed at the centre of this trial”, and tweeted details of Colston’s role in the slave trade.

Errol Francis, CEO of Culture&, a charity that promotes diversity in the heritage sector, told Museums Journal: “I welcome the verdict of the Bristol Crown Court jury that the four accused were not guilty of criminal damage to the Colston statue that was toppled during the Black Lives Matter protest in June 2020. 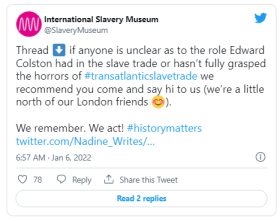 “The charges and trial were in response to an action that was cultural and political in intent, therefore a criminal charges should never have been brought.

“As for the future of the Colston monument itself, the current display of the effigy in a supine position at Bristol’s M Shed museum is a great start to its reinterpretation.

“I hope the display is permanent and will be joined in the future by other objects that acknowledge Bristol’s pivotal role in the shameful holocaust of transatlantic slavery.”

Francis said a different verdict would have been worrying. “In the government’s proposed Police, Crime and Sentencing Bill, the maximum penalty in a case like this will be increased from three months to 10 years. 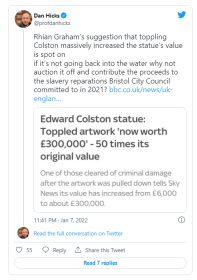 “This will make damaging a statue more serious than rape. Furthermore, the bill also introduces a new statutory offence of ‘public nuisance’ which has the potential to criminalise democratic protest such as the Black Lives Matter movement.

“Therefore, the verdict is also a reminder of these new looming threats to civil liberties by the proposed legislation.”

The toppling of the statue during the Black Lives Matters protests of 2020 led to a heated debate over how the legacy of slavery and empire is represented in the UK’s public realm.

The future of the statue is yet to be decided. It was removed from display at Bristol’s M Shed earlier this week following a six-month exhibition and public consultation on its future.