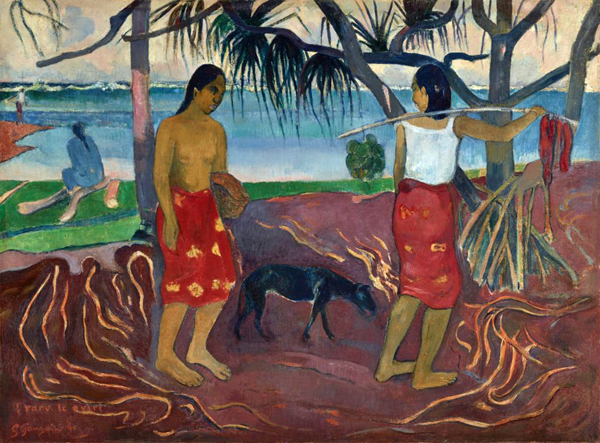 Paul Gaugin, Under the Pandanus (I Raro te Oviri) (1891). Courtesy of the Dallas Museum of Art.

A new book points out that one museum traded three Monet masterpieces for a fake Hugo van der Goes painting.

Most affirmations of a “public trust” doctrine in the US context in the early 20th century interpreted it as a responsibility of museum directors and curators to actually cull and refine collections—that is, to deaccession—in order to seek out a kernel of abiding cultural value from the detritus of the present.  Directors and curators, that is, are entrusted by the public with properly adjudicating what is deserving of canonicity, and jettisoning the residue that falls short.

For example, the New York Times lauded the new plan of the Albright Art Gallery in Buffalo in 1938 to create a “Room for Contemporary Art” as a kind of test kitchen or incubator to confirm the capricious judgment of taste, just as the Luxembourg Museum provided a provisional home for Seurat, Van Gogh, and Degas before passing them over to the Louvre once their canonical ascension was confirmed. The Albright plan would be funded with a gift of $100,000 by the Knox family, and the director Gordon Washburn wrote of their manifesto:

Unusual in particular are the regulations which govern the room’s administration, for it is accepted that the pictures and other works of contemporary art may be resold or otherwise disposed of, if, in the course of time, they do not satisfy the critical judgment of the administrators. In other words, this collection will be formed as a private collector does it. It is hoped, of course that this scheme will save the gallery that kind of embarrassment which most museums have as a result of inflexible gifts and collections.

The New York Times reporter warmly welcomes this new approach as a singular example of abiding by the “public trust.” “The Luxembourg plan has, long and earnestly, been advocated on this page, especially in relation to the Metropolitan. Museum directors feel, justifiably, that works of art or money left or given, or in any way acquired, are in the nature of a public trust. The conscientious director wishes to pass on permanently to the public only those works he believes ‘have passed the test of time and extensive critical judgment.’”

However, since John Canaday’s revelation in the New York Times that the Metropolitan was engaged in the sale of paintings from the Adelaide de Groot estate in 1972, a very different interpretation of the “public trust” doctrine has frequently been raised. Modest versions purport that museums are custodians of our cultural patrimony and are thus entrusted with a public good which is already predetermined; thus a disposal may abuse that inherited canonical status. Stronger versions propose that the public legally owns these objects and a sale is then a violation of a property right. These competing visions of a public trust shift the grounds from selection to securitization, such that the process of curatorial selection is now overwritten with a limited obligation to simply secure what has already been accessioned in perpetuity.

Gordon Washburn’s pioneering vision for the Room for Contemporary Art at the Albright Knox Gallery may have been designed to tease out the capricious delineation of taste concerning contemporary works of art, but this policy was less successful during his later tenure at the Rhode Island Museum of Art in 1942 to 1949. That case illustrates that deaccession mistakes certainly can be made in spectacular fashion, but the medium of the marketplace and the regenerative energy of future benefaction can sometimes save the day.

Washburn began his career at the Albright-Knox Gallery, where he pioneered the innovative program for the Room for Contemporary Art in 1938, with a liberal acquisitions policy designed to mimic the buying and selling of a private collector. While this policy might have been opportune for a fledgling experiment in acquiring contemporary works of art, in order to explore the contours of the emerging canon, it served less well for Rhode Island’s permanent collection. Although he did acquire some important paintings, he is best remembered for some spectacularly poor deaccession decisions.

In 1945, for example, he exchanged three important Monets acquired by his predecessor in 1929— Cliff at Étretat (1885), Nymphéas (1913), and The Bridge at Argenteuil (1874)—to acquire a Hugo van der Goes portrait on panel that later turned out to be a wrong attribution and essentially worthless. In 1948 he exchanged a Tahitian subject painting by Gauguin, I Raro te Oviri (Under the Pandanus) (1891)—later gifted to the Dallas Museum of Art in 1963 by the Levy family—for a Théodore Géricault that turned out to be a fake.

His most infamous deaccession, however, was the sale in 1945 of Picasso’s La Vie (1903), the seminal and haunting homage to the artist’s friend Carlos Casagemas (who had committed suicide), judiciously acquired by the museum in 1937 and probably the most important Blue Period painting in the United States, in order to acquire Auguste Renoir’s Young Shepherd in Repose, a much lesser work.

The Picasso painting, “recognized as Picasso’s culminating masterpiece of the Blue Period,” according to William Robinson of the Cleveland Museum of Art, had been acquired in September 1937 for $22,500 from Reid and Lefevre in London, acting as agent for Ambroise Vollard, when the museum was between directors. It had already been offered to several British museums but none was interested. When Gordon Washburn arrived as director in 1942, it was one of the first works to be dispensed with in his reorganization of the museum’s collections. He would later profess that it was “not intensely admired” at RISD and was “too large for exhibition in any but our Old Master’s Gallery.”

“I have always felt it was one of the least successful of Picasso’s early works … and curiously enough a number of other people mentioned the picture to me in the same terms, suggesting we dispose of it.” Although it had been selected by Alfred Barr in 1939 for his Picasso retrospective at MoMA, Washburn sent it for private sale through New York dealer Theodore Schempp for $18,000 minus a 10 percent commission, along with another work apparently deaccessioned and sold directly to Schempp, André Derain’s painting Portrait of a Girl.

In a case of horrific bad luck, La Vie got soaked on a train platform when it was left exposed during transport to New York during the Great Atlantic Hurricane in September 1944. When waves of water splashed the painting’s surface, it effloresced in a white film and suffered paint losses, which by various accounts devalued it by 50 percent, or in one testimonial down to a mere $3,000. Picasso himself, Washburn professed privately, could not repaint it and restore its former glory. Ultimately the painting was restored through the removal of the varnish, and most agreed it was not thoroughly impaired after all.

Schempp then sold the painting to fellow dealer Germain Seligmann of Jacques Seligmann & Co. for $18,000, who promptly informed Cleveland director William Millikan when he was visiting the gallery in New York that he had something special for him. Millikan was apparently dumbfounded and exclaimed, “But it is impossible. It belongs to a museum.” Upon learning of the deaccession, however, Millikan raced up to the New York apartment of Cleveland trustee Leonard C. Hanna, who immediately agreed to acquire it for the asking price of $34,000 in advance of the next Collections Committee meeting, which would formally accession it. Seligmann thus made a quick profit of $16,000, and one precipitous demotion through the deaccession process had yielded to an equally precipitous promotion by another museum, through the intercession of a private collector and an alternative curatorial vision.

Clearly Washburn made some unfortunate choices in his later tenure, but if these deaccession debacles are viewed in a more holistic light, the loss accrued primarily to the scope and depth of the Rhode Island Museum’s collection, not to our cultural patrimony in general, as most of these works were ultimately acquired by other institutions through the benefaction of private donors.

It is precisely this regenerative power of the marketplace—working in tandem with the impulse toward museum benefaction, creating new opportunities for renovation and renewal from what once seemed lost or jettisoned—which can retest provisional judgments about the canon for future generations in the ongoing articulation of the public trust.

This edited excerpt is from the new book Deaccessioning and its Discontents: A Critical History by Martin Gammon (MIT Press, 2018).