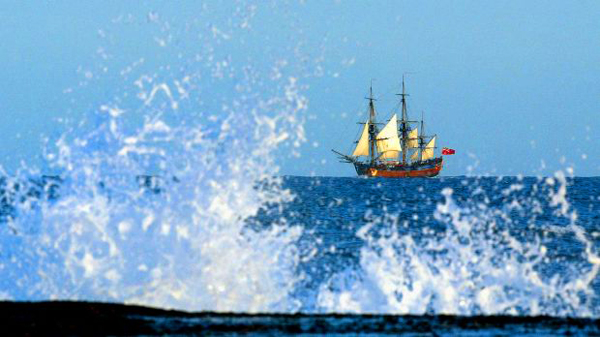 A replica of the Endeavour is the focus of many public programs at the Australian National Maritime Museum. Photo: Robert Pearce.

Trea Wiltshire, ‘We’re closing in on it’: the hunt for Captain Cook’s ship, the HMB Endeavour, Sydney Morning Herald, 1 October 2016

It was an act of sheer desperation, before an early battle in America’s bid for independence from the British Crown. The most famous vessel in Australia’s history was scuttled, just off Rhode Island. It was 1778, a decade before the First Fleet sailed into Botany Bay.

While few Australians are aware of the Endeavour’s story after it sailed out of Australian history, maritime archaeologists in both the United States and Australia have, for many years, been trying to find the remains of the iconic wooden bark, and they are hoping their current fieldwork will raise awareness of their quest – and of its need for adequate funding.

Back in 1778, as that early battle in the American War of Independence approached, Britain’s colonial forces in Rhode Island were facing the prospect of confronting both the American forces on land and the French naval allies on water.

This was the scenario that claimed HMB Endeavour, the vessel that had carried Captain James Cook to the uncharted east coast of the “Great South Land” in 1770. Clearly outgunned by the approaching French fleet while awaiting reinforcements, the desperate British scuttled or burned frigates, armed vessels and more than 13 transports to block the harbour and stop armed vessels falling into enemy hands. As the fleets prepared for confrontation, a hurricane and turbulent seas took a toll on both, snapping masts and rudders, forcing the battle that occurred three weeks later onto land.

While the Battle of Rhode Island proved to be brief, historians consider it significant in that it was the first in which America’s French allies participated. The French were keen to avenge their humiliation in the Seven Years War and to challenge Britain’s monopoly of North American trade. And while the outcome of the confrontation was inconclusive (both claimed victory), Britain lost more of its fleet than in any other battle in the War of Independence.

Meanwhile the Endeavour settled into its watery grave in what has now become a millionaires’ playground: Newport Harbour is filled with expansive, showy yachts and Newport is home to America’s most opulent mansions, built by the likes of the Vanderbilts and Astors during what Mark Twain dubbed the “Gilded Age”.

The Endeavour’s precise location in Newport Harbour is unknown but maritime archaeologist Dr Kathy Abbass says: “We are closing in on it.”