You are here: Home » Articles filed under: 'News' » Article: 'How ACMI is connecting to the future'

How ACMI is connecting to the future

February 28th, 2019 | Browse other: News. | Tagged with: ACMI connecting to the future, Australian Centre for the Moving Image | 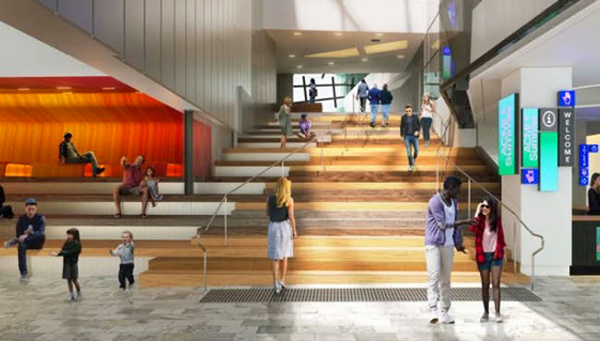 The entrance to ACMI is in line for an overhaul and will eventually look like this. Photo: ACMI.

Gabriella Coslovich, How the Australian Centre for the Moving Image is connecting to the future, The Age, 12 February 2019

On a weekday afternoon it’s difficult to tell the difference between a game arcade and the Australian Centre for the Moving Image‘s permanent Screen Worlds exhibition. Same volume of electronic beeps and whirrs, same force of flashing lights, same knots of kids huddled over screens. A lively bunch of teens poses in front of a shadow puppet screen, perhaps not registering that it’s an ancient form of moving image. Families wander about, taking in a busy and somewhat haphazard collection of objects: Crocodile Dundee posters in Chinese, Dame Edna Everage costumes, a replica of the Mad Max hoon car the V8 Interceptor, chunky old television sets, vintage movie cameras, film clips of the changing Australian accent, and the simple flipbook, an age-old form of animation. In all, it’s a cacophonous after-school playground, and in many ways that’s a good thing. Every big, government-funded, cultural institution wants mass-appeal, and ACMI claims it’s the most visited museum of the moving image in the world.

Last financial year, 1.55 million people walked through its doors at Federation Square – 568,000 of them heading to the free Screen Worlds exhibition, others to the centre’s spacious, high-tech cinemas for various film festivals and special screenings, or to its main subterranean gallery to see ticketed exhibitions such as the ACMI-created Wonderland (seen by 179,226 people) about the many cinematic interpretations of Lewis Carroll’s famously psychedelic children’s book Alice in Wonderland. And yet, ACMI is about to tinker with its winning formula. Tinker being an understatement.

Almost $40 million will be spent on a massive makeover scheduled to begin mid-year, with $34.8 million from the Victorian government, contingent on ACMI raising another $5 million. ACMI will re-open in mid-2020, so transformed that Melbourne will practically have itself a new museum. For all its popularity, Screen Worlds is almost a decade old (it was launched in September 2009 by Cate Blanchett in a show-stopping crocheted Romance Was Born dress) and its history of the moving image ends, somewhat embarrassingly, with an iPhone 3 encased in a glass dome. A decade on, Blanchett’s dress would have more impact encased in glass. It’s high time for an upgrade.

In fact, ACMI director and chief executive officer Katrina Sedgwick has been working towards this redevelopment since her appointment in February 2015. Sedgwick’s predecessor, Tony Sweeney, at the helm from 2004 to 2015, was the instigator of Screen Worlds, an Australian-focused display that tells the story of how moving images began and how they have evolved. The exhibition’s opening was a turning point, doubling visitor numbers to an institution that had been in the throes of an identity crisis. As the national museum of film, television, videogames, digital culture and art, ACMI’s remit is so vast that it can veer towards the unwieldy. Screen Worlds helped cement the centre in the public’s imagination.

“And that exhibition still stands up remarkably well a decade later … it’s the jewel in ACMI’s crown,” Sedgwick says.

But the jewel needs burnishing, as does the ACMI building as a whole. A sprawling institution spread over four poorly connected levels, ACMI has been difficult to negotiate from the start, with a profile as fragmented as its physical presence.

“ACMI for a lot of our audience members has been a series of parts,” Sedgwick says.

“People will come for a particular film, or a festival, or there’s a particular exhibition on. Often, people don’t know they’ve come to ACMI. They’ve been to Fed Square to see Bowie,” she says, referring to the Victoria and Albert Museum exhibition David Bowie Is, which toured Australia in 2015 heading exclusively to ACMI.